The Ghost of Barney is turning 21 today. Well no, he’s not, he’s turning a bit over 40 but he likes to think of himself as a young, virile thing still, so we shall humour him! So as the dutiful wifey of said spectre, I set to thinking of an appropriate dinner to celebrate his milestone. I couldn’t think of anything really, so I turned to foodisthebestshitever and what do you know? They’d thought of it for me. Thank you chaps! Peking* Duck and Miso Broth with BBQ Pork accompanied by sticky rice balls, and some duck dumplings and fried chicken wontons as starters. The offspring are making a cake so that’s dessert done.

Let’s walk through the journey of how I got the ingredients – or as I like to call it, Liz’s totally awesome adventure through Chinatown, after which I may have bought a lychee juice box, when I should have been at work doing boring shit. Oh yeah.

First I got on the bus which stopped conveniently, just outside my work door and was also conveniently, air conditioned. I got off the bus and accompanied a large group of Chinese young people making merry all the way to the Asian supermarket. I love the ducks and chickens and bbq pork hanging in the window. I think it’s the only non-sausage, non preserved meats that I have ever seen in a shop window since 1979 when I went to see our local butcher in Wallumbilla. Yes people, that is a place – and what do you know, spell check knows it already. All hail spell check, for you art our new Lord.

Anyway, I left the duck til last and entered the Aladdin’s cave (what do you know, spell check knows Aladdin as well) of Asian goodness. Man I love Asian supermarkets. They speak of taste bud adventures, hidden gems and possible upset stomachs after you buy something that doesn’t have a speck of English on the wrapper and ingest it the wrong way.  Winding my way slowly through the higgledy piggledy (damn you spell check, you DO know everything!) aisles, I went so slowly so enthralled was I by the strange and potentially dangerous produce on offer, that I was passed by an old man with a Zimmer frame and one leg. My basket was loaded with all sorts of lovely jubblies (ha! Gotcha spell check!) and I carefully approached the doyen at the checkout.

After scanning all my goods, the doyen at the till asked me if I had a “buserwersadurkastan” or something. I instinctively said “sorry what?” and she said “do you have a buserwersadurkastan?” I said no, I was trying to give them up. She looked at me funny and turned to her comrade at the other till and said something in Chinese. I wasted no time and hurried off to choose my duck from the ones hanging in the window. I also couldn’t resist a fillet of BBQ Pork – you KNOW I love a good porking – and made my way back to boring work on another conveniently air conditioned bus. And then drank my lychee juice box which was delicious.

Now as luck would have it, the Ghost of Barney drove by my work and picked me up with my shopping and drove me home, saving me the inconvenience of walking anywhere in the heat. I introduced the duck to the family when I got home. The duck said hello politely because it still had its head and beak and its manners and the family thought the fact it still had a head and beak was a little bit distressing. More distressing than a talking duck it would seem.

I then went to work on de-skinning, deboning and mincing the meat from the duck for the dumplings and defrosting a chicken breast for the wontons. It took me a while to make up a couple of packets of the dumplings but it is well worth the effort as fresh dumplings are to die for. Just ask the duck. Anyway, because the dinner wasn’t until the next day, I put the dumplings on a biscuit slide with baking paper and popped them in the freezer. I used to do this with the dumplings and wontons in the restaurant I worked in and they come out a treat. To fill one small packet of wontons, I used one chicken breast, coriander, a small piece of chilli, garlic and ginger into the food processor and whipped that bitch’s ass until it was a chunky gelatinous mass. Then I laid each wonton wrapper out so that a corner was pointing towards me. Using two teaspoons, I put small heaped portions of the mixture into the middle of the wonton wrapper. Dip your finger into a glass of water and run it sexily around two sides of the lower side of the wrapper like you’re painting your lover’s nipples with chocolate. Then, unlike painting nipples with chocolate, take the point closest to you and fold it up to the top point, making a triangle. Starting from the filling, press the air out and the sides of the wrapper together, sealing the triangle. Pick the wonton up with the bottom pointing at you and bend the two outside points around together and seal with water. Yeah, like some tantric sexual position. You know you want to try it.

chicken wontons, deep fried and ready to be inserted into your face

Finished! Deep fry these suckers and you have an awesome snack. 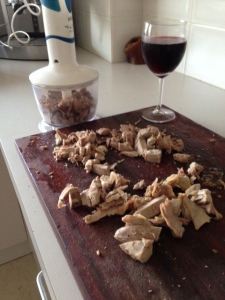 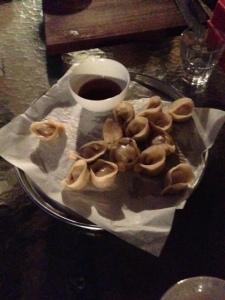 steam those puppies and then put them in your face

The dumplings, I cooked in a small quantity of oil in a heavy based pan then tip in a half cup of water, put on the lid and steam them. These dumplings are also known as pot stickers – because they stick to the bottom of the pan. Duh.

The Ghost of Barney was well pleased with his meal, especially the broth – and the duck skin which I deep fried to make a crispy treat! Plus he digs my tantric sex moves. Sorry, too much??

*Pekin (as apposed to peking duck) duck is a breed of duck. Pekinging a duck is Pauly’s way of describing an individual of said breed that is going through the process of being killed, plucked, marinated, blowed, dried and baked. Pekinged is Pauly’s way of saying that the said duck is ready for his further cooking and consumption…