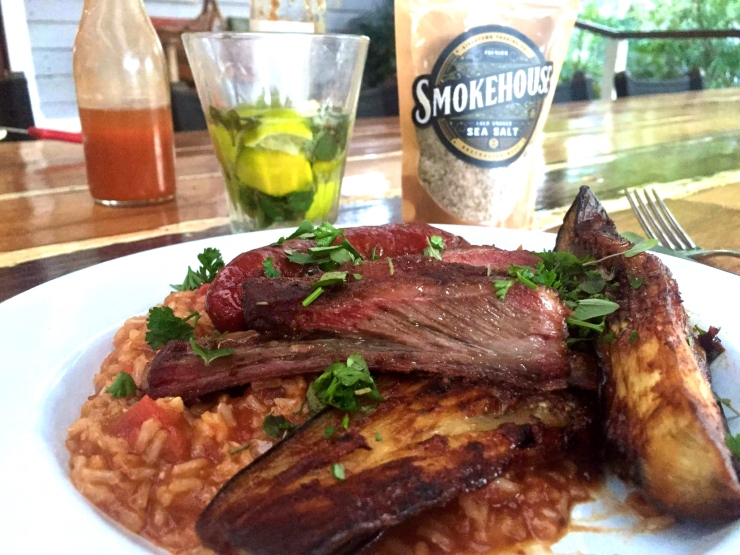 These sausages are quite frankly what I consider to be the best sausages in these here parts – made by the fine folks at Hayters Hill Butchery. His bratwurst (Well, not his bratwurst. I know nothing of this man’s sausage and that is the truth) was my sausage of choice on this day – absolutely a pleasure to put in mouth. Hmmm. I’m sounding more and more like a “lady of the night” by the word…

The sausages were reals good after 2.5-3 hours at 110C (220-230F) over ironbark. Really bloody good. The Hayters Hill crew also do a cracking chunky pork snag which is also a tasty tasty thing after a few hours in a smoker. I am also pretty sure that these sausages would even be hella tasty raw, but that it just a guess and based on absolutely zero personal raw sausage eating experience I will admit it.

You will probably not be able to find any Hayters Hill sausages at your local market because we pretty much buy all of there stuff up here in the northern rivers of NSW, so you can use whatever it is that you consider to be a great sausage in your own mind…

The lamb ribs were given that same ironbark-smoky 110C treatment, and very similarly to how you may do pork ribs, they were given 3 hours of smoke, followed by wrapping and another hour in the smoker, followed by a 1 hour rest after that. The internal temp was 92C (200F) and they were fricking perfect.

Lamb ribs are definitely not pork ribs but they are still damn tasty in the smoker and something a little different for you next BBQ. They can also offer that same sort of smoky ribby wow factor but at a heaps cheaper price tag than pork or beef ribs… that is, until the butchers work out that they are just as tasty as their high-end friends and bump the price up on these puppies too.

I also made some red rice and miso & maple glazed eggplant, and placed some peppery hot sauce and smoked salt on the table to complete the package that was our dinner on this evening. It was all plenty tasty. My eldest son, Seba, even commented that although he doesn’t like eggplant, and this was certainly no exception, it was the best eggplant he’d ever been forced to eat.

Heat a little oil over medium heat in a cast iron skillet or pan. Add eggplant and cook for 2 minutes each side until browned and starting to soften.
Using a pastry brush or your fathers best paint brush, glaze the eggplant generously with the miso number.
Place under a pre-heated grill (broiler) until caramelized and sexy.
Eat it and force your children to eat it even if they don’t like eggplant.

View all posts by foodisthebestshitever

6 thoughts on “Sausages and lamb ribs and eggplant… and red rice.”