Vasse Felix was hands down, the best meal we had in West Oz. I would’ve enjoyed the meal even if I didn’t have a mouth and someone else had to chew it up for me and push it through a tube in my neck, although everyone around me may not have enjoyed their meal so much. If I tried really hard I could only fault one thing… and I’ll get to that later if I’m feeling like portraying myself as a big time wanker restaurant reviewer. Doubt it. The food was fantastic, as was the wine and the service. Attentive without being intrusive, you know. Our glasses were always full at the right times and we were left to our boring conversation and playing on our phones when that was called for too. And the setting, on Margret River’s oldest established vineyard, is nothing short of really nice.

‘The charcuterie plate’. Mt. Barker chicken liver parfait with pear gel, pork rillettes with mustard fruits, spiced plum, red wine gel, venison & pistachio terrine, carrot marmalade. Effing sooo good. This is the shit I love to eat. But I don’t really love to eat shit. I do like shit though… and stuff. Do you like stuff?

(My nan’s house for sausage and cheese and polski ogorki and mustard has to sneak in here. Although the venue is not open to the public yet, it remains one of my favourite eating experiences on the west coast.)

Maleeya’s Thai Cafe and Bamboo Nursery was my second favourite eatery of our trip. Great Thai cooked by a little Thai lady and served by her very tall Swiss husband. It is a classic combo. A ying and yang thing. Perfectly balanced… just like the food. Exotic women in the backyard… or maybe that should read exotic herbs and vegetables. The ladies could make it a more authentic experience? But I wouldn’t even have time for the ladies out back… can’t talk, eating… mmm. Tom yum goong… my favourite. Yeah, spice that shit up for me. Pad thai with prawns, red curry chicken with Thai eggplant and bamboo shoots, pork ribs braised with honey and spices and steamed rice to mop up all the extra sexy goodness… that’s the curry juices, not from the ladies out back. In the foothills of the Porongurup National Park and only open Friday, Saturday and Sunday. Find it and go there. 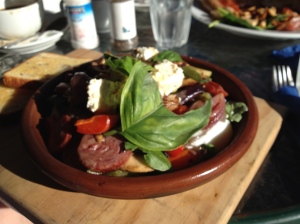 The Vancouver Store and Cafe. After a serious of oh so average and disappointing breakfasts on this trip thus far, we remembered about a little gem of a cafe my Uncle Rob had told us about last time we were here. And so we thought it would be common sense to go there. So to show everyone we are not stupid we went there. And it was really good so we went there again the next day. The coffee was good and they got it right (Jen drinks a soy piccolo, and I don’t even know what that is* but I don’t feel to bad because most places can’t get it right anyway), so we drank lots of it.

The Squid Shack at the Emu Point boat ramp in Albany. We had local shark, which was fresh and in a nice, crisp batter. Local squid, which was tender and delicious. My mum and nana had two pineapple fritters each, which looked crispy golden and delicious but alas, because of a hugely successful go at painting the town red the night before, I was in no condition to keep eating. I couldn’t even take my effing sunnies off for fear my eyes may explode, and I would never be able to see the young lambs skip through the hills again. My brain was so off duty I forgot that the Squid Shack was behind me when I took this photo. It’s a nice photo of Emu Point though.

And that’s about it from the diary of a drunken rampage through WA.

*I may not know what a soy piccolo is but I know that it has a magical power to make my day beautiful. Or adversely, make my day a living hell if it is not administered at the earliest possible moment after awaking…

One comment on “the three best meals i had in WA”