Quite frankly this was nothing short of genius. It was one of those meals that was guaranteed to go right, as if if were blessed by jesus himself. But this wasn’t your run of the mill, everyday, loaves and fishes for the starving hundreds… thousands?… millions? (this is where my ignorance becomes very clear) type thing. It was marinated pork belly on the BBQ.

Even when I suggested it be served with whipped potato… not that I’ve ever eaten that before…I think I just heard an American talking about it. It sounded like a good thing at the time anyway. He scoffed at me and gestured, as if to say “Hey, I’ve got this one bro”. Aaah, the padiwan makes his move on the master. I love it.

When I returned home from work that afternoon preparation for the feast was well underway. Cabbage was being shredded for coleslaw (always a favourite with me), potatoes were boiled for potato salad, sweet sweet corn was wrapped in alfoil to roast in the coals, and the pork belly (on the bone) was looking almost rootable* in it’s overnight marinade of home-made bbq sauce (recipe down there)… and the char grill was presenting, ready to receive.

The end result. A meal any half-way-to-being-tipsy drunkard (and to give credit where it is due, most people out there, except maybe vegetarians and Muslims) would consume with relish. 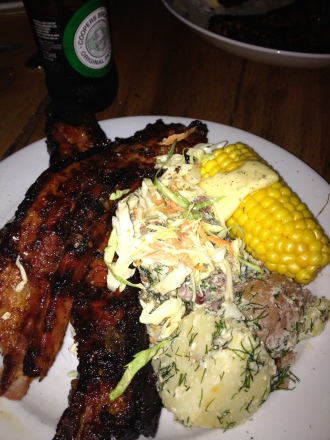 2-3 smoked chilli, depending on heat

In a heavy based pot (yeah I’m going to keep saying it), sweat off the onion and spices until soft. Add all other ingredients and cook out on a med-low heat for an hour or so, stirring regularly so it doesn’t catch and turn your pot of smoky goodness for a months worth of bbqs into a pot of blackened shit for the bin, today. Keep cooking until it starts to thicken and bubble like a witches cauldren. At this time be careful of those bubbles, because when they pop they do splatter hot lava onto any unsuspecting bare skin near-by. And, as with a lot of things, it may appear great, back give it a chance and it will hurt the eff out of you… I think that was a metaphor for something… who knows. Cool, check seasoning and blitz for a smoother sauce or leave it chunky if you want.

*rootable. Able to have sex with. Fuckable.

2 comments on “The dinner Queenie cooked”