Some years ago when cows were cheap & horses were dear, I swapped 5 horses for 15 stud cows.

The cows duly calved and one cow had a calf that was a freaking midget. A deadset dwarf! A little bull calf midget dwarf.

My kids christened the calf “Little Latten”, after the guy who swapped me the cows.

A few months later when we were marking the calves I was about to make Little Latten into a steer (remove his testicles) when the kids stepped in with words like “Leave him a bull, he’s too small to get a cow in calf”. I took a look at Little Latten & agreed.

Two years went by. And I kid you not, Little Latten’s genitalia grew… and grew… In fact his scrotal circumference was 38 cms, which put him in the ‘legend’ category. A bit like my son-in-law!!

Anyway, long story short I was riding my ag bike (agricultural bike, what they called a motor bike in the bush) in the paddock where my stud cows were and there was a huge cow on heat (keen for the love to be made to her) & Little Latten had talked her into backing into a gilgai (small crater) which was about 3 foot deep.

There was Little Latten up on his back legs and man he was giving it to this cow!!

Come to think of it she looked quite pleased about the whole deception.

Anyway, quick as a flash I ran the cows into the stock yards, whipped out my pocket knife & made Little Latten into a steer.

He only ever produced one calf!!

As told by Dr. Chris

NaaD. BMTH. TTaLFY
(Not an actual doctor but more than happy to take a look for you)

Now a photo of a nice piece of ribeye we had for dinner recently and then I’m gone… back into my home in the world wide inter web… amongst a myriad of conspiracy theories, angry cats and semi-nude selfies.

Roast some beef exactly like you like to roast your beef. Some kind of vegetables are good for contrasting colour and flavour… 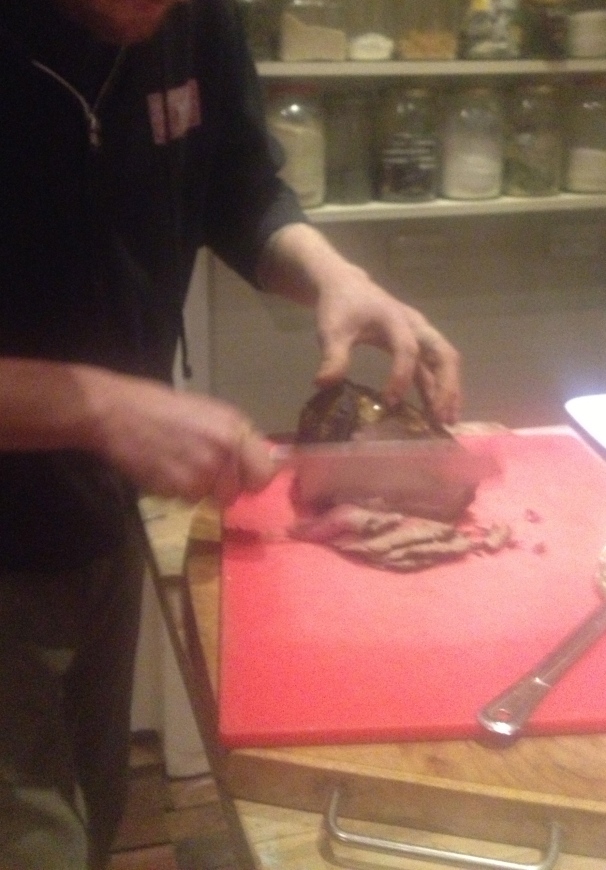 After the meat has rested slice it up. Get your wife to take a dodgy action shot while you do it

I like mine heaps pink, but the good thing about this kind of roast is it will be a little rarer in the middle so that’s for Dr. Chris and myself, and Jennee gets the end bits. Oh, and some kind of red wine gravy and a bit of mustard is always good

9 comments on “Another story by Dr. Chris and a cracking beef roast”