That was a top notch weekend with the Cromwell’s.
So very crackly and good.
Follow foodisthebestshitever on WordPress.com

Anyone who knows me, or thinks they know me, or follows my life through the misty little second story bathroom window that is this blog, will know two things. That I am a fan of the yum cha, and that one day of birthday celebrations is never enough. There are yet undiscovered tribes of pygmies in the amazon that received the memo regarding these points. Catch up quickly would you.

So the obvious combo, considering yesterday was Jennee’s birthday, would be me, Jennee and another lady of her choosing have a special little party of our own… the second most obvious combo was to piggy back a trip to yum cha into Jennees birthday celebrations. So, as you could well imagine, we got our asses up the coast and indulged our faces a feast of tasty dumpling-y treats. And maybe a little peek at some cute Asian girls…

They have tables and chairs 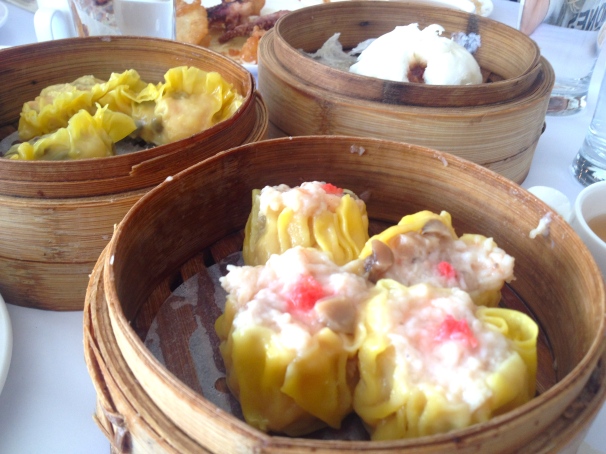 Crisp honey chicken for the boys… but truth be known, I probably ate most of it

For me yum cha, and a lot of eating in general, seems to follow a bit of a porky motif. This in mind, it is probably no surprise (even with your 1st gear brain) that items such as steamed pork and prawn dumplings, pork buns, braised pork ribs and fried pork dumplings (these were so damn fine I got a second serve) featured very heavily on my own personally designed 12 course degustation menu, not lacking in anything I needed to make my dining experience complete; sriracha hot sauce, soy sauce, steamed rice and plenty of jasmine tea. Just jasmine tea. Leave the beer to the crew who aren’t in the know because for every beer you drink you will be denying yourself two dumplings at the very least and that is just a silly mans game. And, if you really want the crew to think you’re a yum cha pro, when your teapot is empty turn the lid upside down. Immediately one of the hundred staff will appear at your side with a new pot, or possibly a cheap hospital-tea-lady top up out of a large aluminium pot in a less reputable joint. But you will have more tea. 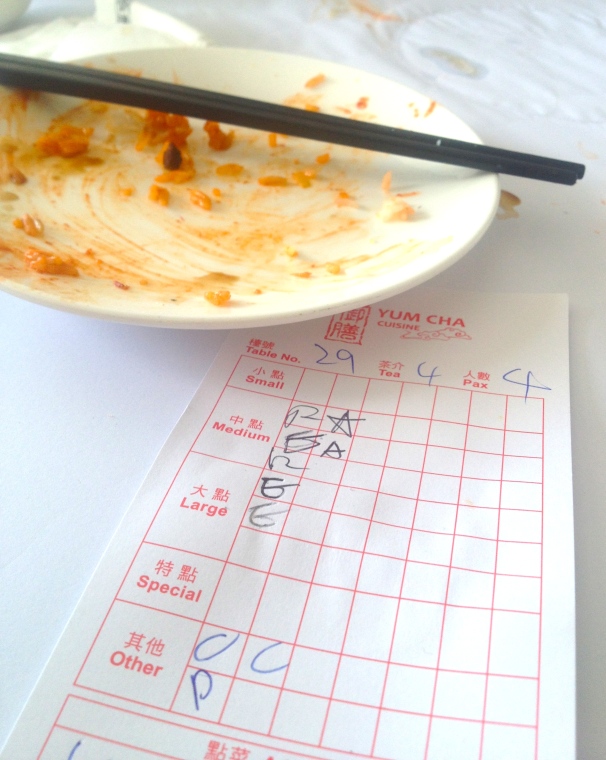 The bill. I seriously have no idea what that says. It might say “charge the stupid round eye like a wounded bull” and I am going to give them my money with a full belly, a smile on my face and say thank you

I have a theory (here we go…) that all yum cha restaurants follow a basic set of rules or guidelines put in place and policed by an organization that is quite probably called “the International Bureau for the Standardisation and Quality Control of the World Dumpling Industry”, or possibly fondly referred to by the acronym TIBFTSAQCOTWDI… Robina Yum Cha had been given the brief and certainly followed the 6 basic guidelines set out by TIBFTSAQCOTWDI;

But this place didn’t quite tow the line like others before it. The staff were a little happier and had time for a little chat and a laugh. There was none of the get in, eat and then scurry out to make room for the next lot of diners. It saw nary a man nor woman carrying a stack of bowls twice the size of his or her own body, nor with the ability to reset a table of seven place settings, with only the flick of a tablecloth a la David Copperfield. The food on the trolly was fresh, definitely the freshest of any of the yum cha we have been to in the area. This place rocked. They rocked a cracking balance of enough food to feed the punters, enough choice, freshness, staff per customer and Pop Asia chic.

Defo worth a trip if you’re in the area… but maybe not a “hire a personal jet and go there for lunch from the other side of the country” type thing. Although Jennee disagreed with that last comment and thinks it is well worth the hire of a personal jet to eat there.

Go there and get your dumpling on!