This is not a recipe; it is a story about awesomeness. Mr awesomeness, to be precise.

It was last Friday. ANZAC Day where I come from. We were up early, not for a dawn service (but believe me when I tell you that is not through lack of respect), for today I had an appointment with a pig. No, I didn’t need to visit the local constabulary, I had an appointment with an actual porcine mother effing pig. But we did spare a moment to think back to the service men and women of different colour and creed, both animal and human, who have given their lives so that we may live as we do today. Our minds also wondered of a day in the future where the wars would end, a peace would break out…

Back to Mr Awesomeness.

Clean up the pig and get the fire going. Check

Pit dug and fire defo on the way. Check

It was a misty morning that Friday and my brain was hazy like the fog filled gullies that surround us. It was early when we were jolted from our slumber by the notion that Mr Awesomeness may be waiting for us and we should get on our way. My head was still hazy, and quite frankly the coffee wasn’t really helping.

If I can deviate from my course for just a minute, I would like to lay blame for this hazy brained morning squarely and fairly on the lap of one AJ the Duckman. He arrived the previous afternoon with his lovely lady friend, Claire the Dentist (Claire is an actual dentist, not someone who will “re-arrange” another persons teeth for a modest fee). So AJ arrived and we drank some beer… it was a forgone conclusion really; we would rise from our slumber wishing we could fall back down and slumber some more… but we didn’t. It was off to the pig farm for us. 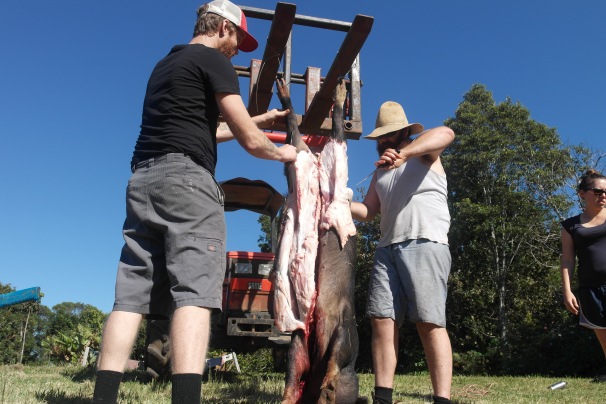 Skinning that bad boy. The tractor hoist does a good job as a hanging pole

Oooh, five bucks… me in my new shirt. The only reason I had to wait until now to post this is because I was wearing my new shirt and I sent Pauly one as a surprise and he only just got it today. Rodger that

Matthew the Pig Farmer (everyone has a title around here,,, keeps life simple) has a free-range organic pig farm in the hills behind Byron Bay. His Berkshire pigs happily roam the hills eating, breeding, wallowing in shit and whatever else it is that pigs loves to do. Today we would be dispatching one of those pigs (Mr Awesomeness) so that we may cook it in the ground in somewhat of a hungi* and feed the many people who shall be arriving this evening with the promise of piggy goodness.

So we arrived nice and early, albeit somewhat dusty. 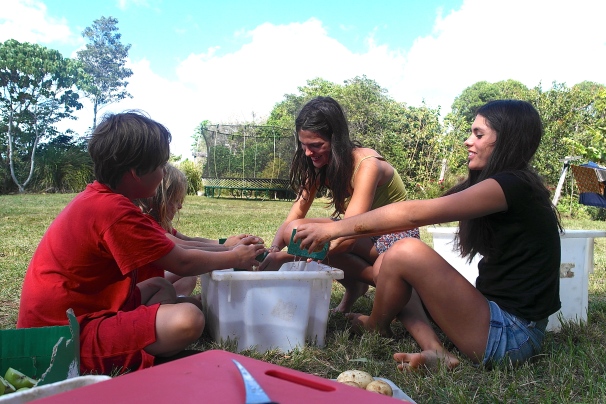 The kids got onto scrubbing vegetables

Mr Awesomness went to another place and soon we set about our tasks to make this food hit the table tonight. Not before I had collected a bucket of his blood though. That blood now sits comfortably in my freezer waiting for me to hold it close again… soon my friends… soon.

The pig had to be butchered, wood chopped, the fire lit, vegetables chopped, approximately 1 million banana leaves de-stemmed, lava rocks heated, a cage made, dirt dug… and hopefully somewhere during the day we would get a chance to take a shower and maybe drink some beer… well, at least drink some beer. And the only crew that were available were all either hippies or backpackers – both are basically impossible to move if it comes to working… but both really come into their own when it comes to playing a musical instrument or holding a Bob Marley tune. So I felt we shall be doing a lot of the work ourselves.

And the packaging begins 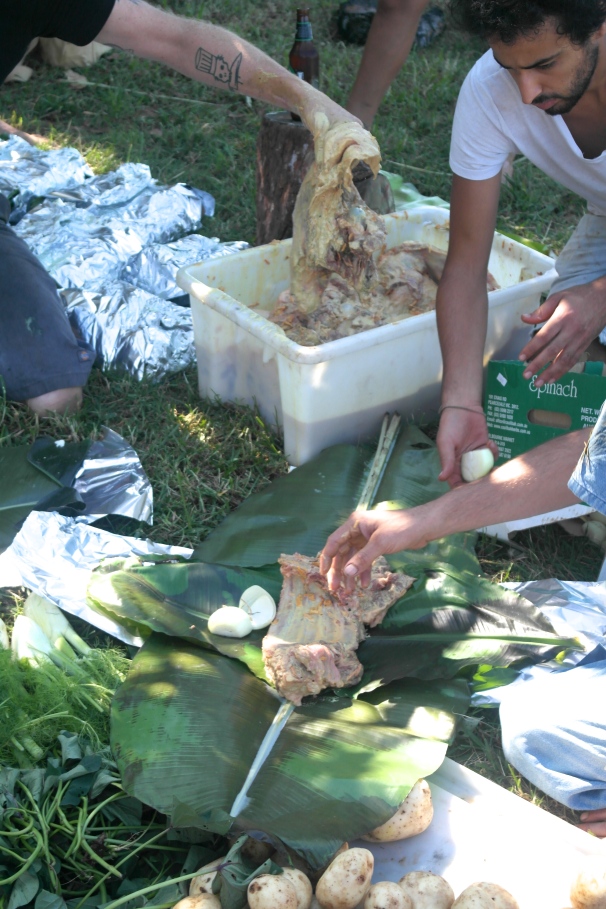 A bit of pork, some coconutty goodness, a bit of sweet potato, some onion… 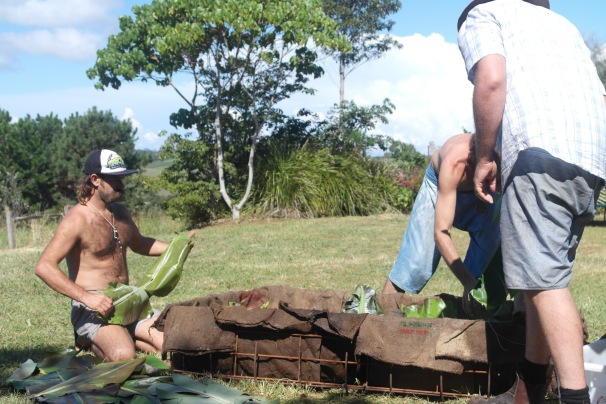 The whole thing was borderline a medieval experience for me. Tribal. Biblical. The whole lot combined into one. It was amazing how you are looking at a living pig, saying sorry or thank you or however you deal with this sort of thing (I’ve got to admit a bit of hippy comes out in me in these times and I always say a nice thank you to the beast), and then suddenly you are taking it apart thinking how good this is going to taste. I don’t got no words for that…

Out of the pit and onto the table 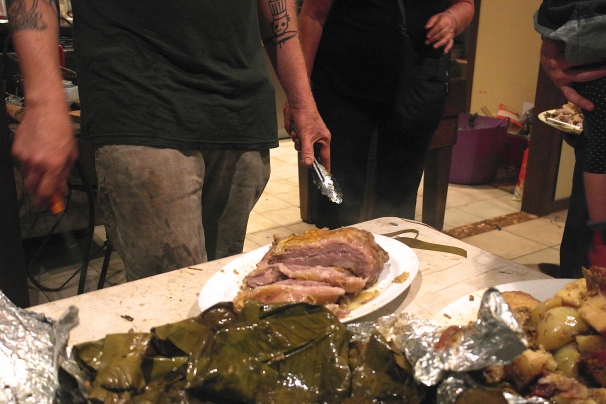 Carving Mr Awesome up for consumption by the masses

A nice little piece of shoulder. The fat on a Berkshire pig is something else

By the end of the day we had;
• Butchered the pig and marinated it in fresh tumeric, coconut and chilli. The marinated meat was then packaged into banana leaf parcels and then wrapped in alfoil for extra security… I’m a white man here. Give me a break
• We wrapped some vegetables up so we need not listen to the whining of the people who didn’t want Mr Awesomeness.
• We packed the parcels into a cage lined with wet hessian sacks and more banana leaves
• We dumped glowing hot lava rocks into a pit and then put the cage on top of them. We chucked a bucket of water on the rocks to get them steaming and then cover the cage with dirt
• That stayed under ground for about 3½ hours, while we prepped salad and drank some beer and maybe had a quick nana nap
• We dug that sucker up and unpacked the packages of Mr Awesomeness, ate, drank and be merried the night away

It was a fucking awesome day, awesome experience,  awesome food and totally awesome Mr Awesomeness… and I haven’t even got to the blood yet. A big thank you to Matthew the Pig Farmer. You’re a good man Matthew, a good man.

31 comments on “A hungi at Matthew’s place”