The morning is as cold as they have been around here for the last few weeks. It was crisp like the bacon that would form part of my subsequent breakfast. It was cool like the guy wearing the denim outfit and sunglasses in the club. It was chilly like the penguins knickers. It was time to get the hell out of the house and into Ol’ Byron Town for some breakfast…

We thought we might try Cafe Byron. Upon perusing their menu though, I was not sold on what I will call the Byroness of it. It had the same menu as umpteen other restaurants on the main strip in Byron. All of the usual culprits; corn fritters, eggs Benedict (with hollandaise spelt hollidaes or something similar), pancakes. Whatever. That just really doesn’t do it for me. We did have a quick coffee (which was delightful) because we had already sat down and then it was onto the next stop.

We spied the newly located Byronian Café and Bar, and upon scrutiny of their menu, decided this would be the place for us. It read well, had some interesting shit on it and didn’t appear to have any obvious typos… I’m a fickle bastard I know.

The new fit-out is very nice. Very Byron chic. I should have got a photo but most of the time I really can’t be assed wandering about the place with camera, snapping away like I’m the goddam paparazzi… I just want to sit back, have a nice conversation with a pretty girl (usually Jennee) and enjoy a good meal.

The menu that suckered us in

I had the zucchini fritters with a side of bacon. The fritters were no John Holmes, swaying a little bit to the flaccid side of things, but the flavour was well and truly there so they got the fuck eaten right out of them. The bacon was crisp as the morning air though, so I was happy with that. They came with a nice little rocket, tomato and cucumber salad, labne and tomato chutney. 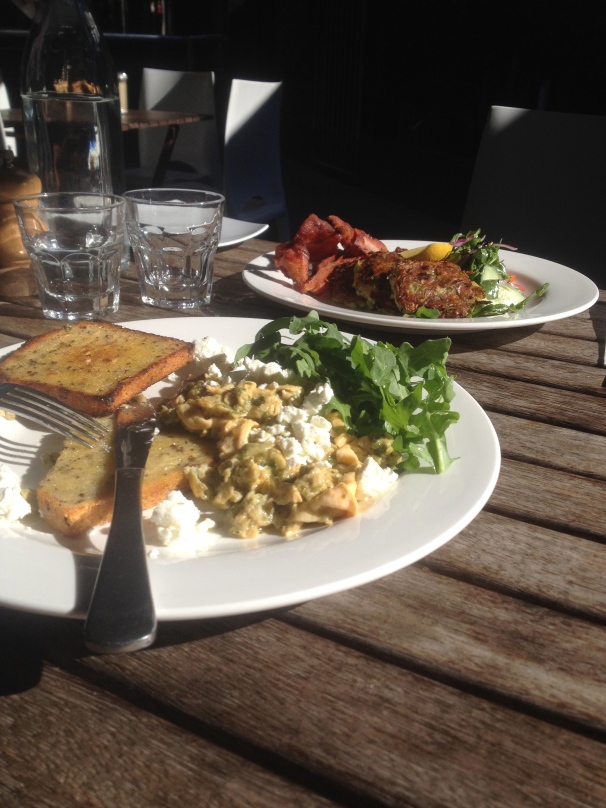 Jennee opted for the green scrambled eggs with chilli and coriander pesto and Persian feta. They were everything they said they would be. The kick from the green chilli was awesome and the eggs were cooked very nicely indeed.

We sorted that shit out

Another perfectly brewed Lavazza coffee and we were done.

I paid with my card, because let’s face it, who they hell uses cash these days? And upon trying to add a tip our waiter said the boss doesn’t allow that with cards because he has to pay for the transactions or some shit. Whatever. Tips are an important part of thanking somebody in what can be a very thankless industry. I emptied the change out of my pockets and they truly did seem thankful for the $1.85 I gave them but a note to the boss man if he reads this; hook up the tip function on your EFTPOS my man… your peeps deserve it!

No trip into Byron is complete without a walk through the belly of the beast. Streets laiden with hippies, tourists, curbside jewellery hawkers and acrobats in the park… so it was a walk for us.

We decided to stop in at “Fundies” – which can only be described as a purveyor of all thing hippy vogue and holistic – to find out what ancient Incan grain the hippies are going nuts for these days. While sussing out the cabinet I ran into my old friend – “the stereotypical guy who embodies everything I hate about hippies”. I was having a look at the cabinet full of quinoa based pies, raw macadamia nut tiramisu and Moroccan vegan slice, when old matey pushes through the space between myself and the cabinet, which is clearly not enough room for him to get through even though he was only wearing a sleeveless hemp shirt, cut off fisherman’s pants and no shoes, just about knocking me over with no “excuse me” or “sorry” or even a quiet “get the fuck out of my way”. These fucktards are everywhere up here and they really do my head in. I don’t care if you’re hippy, black, white, gigolo or jungle bunny. Use your fucking manners! 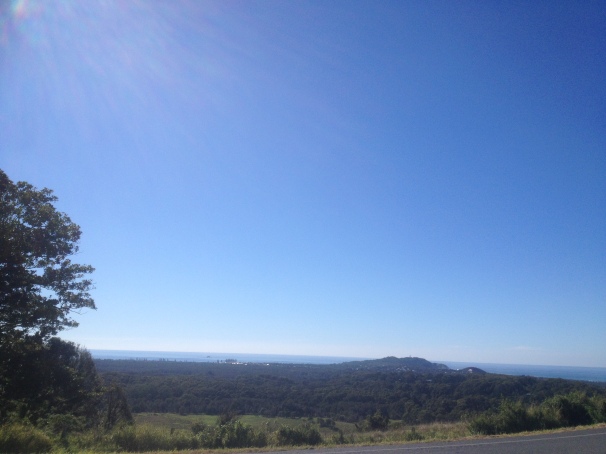 The view of Byron Bay from the hills

We ordered our sweets and attempted to pay in karma credits, but apparently these folks are not quite that hippy and needed cold hard cash. We commented that consumerism had bored deep into their veins but agreed that this was a fair trade for the cleansing of our soul. We took our sweets to a hill over looking Byron and ate and felt the balance being restored.

I now have inner peace.

22 comments on “Breakfast at The Byronian Cafe and Bar, Byron Bay, NSW”