“This is a story by Queenie, who is my wifes’ brother, an avid home cook, and a creature I call my friend.I love him like the whale shark loves the sucker fish. In this story names have been changed to protect the innocent. And by ‘names’ I mean Graeme (we’ll change it to Graz), and by ‘the innocent’, I mean me.” G

My name is Queenie or B or Beever or Coatsy or Cootsy, or any other names Jen has conjured up over the years, and this is my story.

In 2006 I returned from a brief illegal visit to the USA. On my return I met the man my sister Jen had married, and her first born child, and the duck farmer and a few other people. But this story is about Graz and I, and how we first met (I know what you’re thinking Graz, and yes it was beautiful).

Anyway me and Graz decided that, well, I decided that it was a good idea to start on the 4 liters of rum I had brought back from duty free. The night was going swimmingly. We were getting to know each other, he was wearing my cowboy hat (no this is not a scene from broke back Byron) and we had just finished the first bottle.

Jen was long in bed by this time and we decided that the second bottle needed to be started on, we were halfway through the second bottle when Graz decided, nay, the rum had decided that Graz had had enough and that he must retire. Bad move on Grazzas part… I bid him a fairwell and sipped on my rum before spotting the hammock on the verandah. It looked very inviting. After a while the hammock was not inviting and the rum was not sitting well.

The story takes a turn for the worse here for both Graz and I.

Jen woke up to the sound of me emptying the contents of my stomach into the garden and the smell of Grazza emptying his into the bed… beside her. Grazza has never touched rum again. Weak as piss if you ask me…

The next day we made pasta really long pasta. It got out of hand, but this was the first thing that Graz taught me to cook and now, after years of tutilage I could probably go on Masterchef and win it, but I’m not going to. But one of the things I would cook if I went on is this.

Pickled Pork
Put pork into deep pot and cover with water, add 2 bay leaves or 3 if you wanna get crazy, mustard seeds, peppercorns, salt and whatever else you wanna put in, let this simmer for 30 mins per 500g or as long as you can the longer the better.

Black bits is what you need… 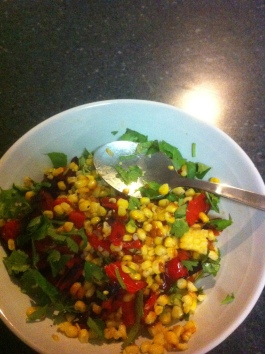 …to make the salsa sing.

Grilled corn and Capsicum salsa
Put corn and capsicum on a grilling pan with olive oil, salt and pepper. Put under griller until its cooked and has burnt bits on it. When cooked chop up roughly. Stir in some fresh chilli, coriander and a squeeze of lime juice.

Guacamole
Everyone knows how to make this, avocado red onion salt and pepper tomato mash it all up

Coleslaw
Cabbage and carrot thinly sliced carrot grated coleslaw dressing or make your own or use QP japanese mayo and a bit of red wine vinegar.

He said eat it. Go do that already…

Cook it and eat. If you practice and do what Graz says in this blog you can cook food.

“Aaah Queenie. The words of a simple man…” G