So three days have passed since my last post and many meals have occurred, we have left no stone unturned, we listened to our friend’s advice, local’s insider knowledge and even just took a punt. I must admit the kind of place we didn’t try was a cheap place as my bank account will attest too.

I like to live my life with balance now-a-days as for many years I (in the words of Anthony Bourdain) treated my body like an amusement park, so to even up the scales I thought it only right that for the next 20 years I give the body/mind a little rest. That being said my version of treating my body well is not quite the same as say a monk or anyone that actually means what they are saying. My definition pretty much means no drugs, other than that simple rule the rest is up for grabs. 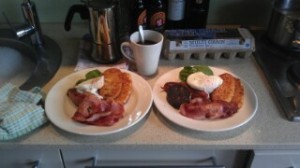 So what I do for balance is get up and go for a nice run or train in the gym, followed by a nice swim and coffee in the sun, all sounding grand so far, healthy even, hang on… then the days eating begins with a breaky (photo attached) cooked by Suzie (my bbq) and more delicious black coffee. The breaky seemed to consist of a little something different every day, in fact it was like one of those memory games you play as a kid where you have a tray of items then you cover it with a t-towel and they take something off, then show it to you again and you have to remember. If you have never played this game you may be thinking I’m a little mental, but at least my parents played with me and not in I will need therapy kind of way. Back to the breaky game, yeah each day we would always have hash browns and eggs but that was the only consistent, bacon, snags, black pudding, spinach all seemed to appear and disappear with no reason, I guess we’ll never know, or care ☺

Wow I just bored myself with that tale of breaky madness, so let’s move right along, next on the days balance scale is lunch and whilst we’ve been away this has been the main attraction of the day, generally 3 courses with at least 1 bottle of wine. So I reckon by this point the balance is already tipping into I’m a fat bastard who just happens to run in the morning side of things.

On Monday we went to Knee Deep Winery for the ‘trust the chef’ lunch I’m very familiar with this concept as it was the focal point of most of the pick up lines circa 2000, and I reckon Knee Deep probably has a lot more satisfied punters as what they do is very good, and what I did… well lets just leave that one alone. They have what I call good honest food, food you’d let baby sit your kids, you understand the menu which is always a good thing now-a-days, but it is all crafted with love, my favourite dish was a ‘pea veloute, brioche crumbs, Persian feta’ simple yet balanced and morish. But the ‘cone bay barra, homemade cheese’ was great and the homage to the lamb roast (photo attached) was close to being exquisite, it looked good, the cauli cheese was banging, the lamb & potato pave was a cracker but I think they used gravy instead of jus for the truffle sauce and it just took away from such a great dish, shame! They had a dessert and another dish both weren’t memorable for me to remember in this big week of eating but they where tasty.

That night to once again appease the gods of balance, we made hotdogs and god damn they where incredible!!! (sorry no photo we where to busy putting sausages in our mouths, then we had hotdogs… ah thankyou)

Tuesday morning was the same again, train, coffee, eat then get in car and drive… this day we hit up Gabriel chocolate a place which make single origin bean to bar chocolate, I was in heaven as they had the tastiest cacao nibs I’ve ever had and dark choc up to 99% (unheard of) definitely worth a visit. Then we went to the caves for the touristy part of the day, quick overview… caves good. Bogans on tour with you, shit house.

Vasse Felix was our lunch du jour and it had come highly recommended by well just about everyone, and with expectation that high it was going to be hard to live up to. But it really was high quality food, the menu read beautifully and our entrée where a triumph although Laurens picked a better dish, this is a rare occurrence so lets take a minute to say… “well played Lauren” the dish was ‘cured torched kingfish, smoked eel sushi’ (picture attached) it was incredible to look at, smell and thankfully to eat. Mains was a different story my pork belly kicked her gnocchi’s arse (yes I am competitive) in fact I tried to savour the dish but it took less then 4 minutes for me to clear my plate (photo’s attached)… his food was all well executed and cooked to perfection but it was a little to pretty at times, I prefer my flowers on the table not the plate, but that’s just me. 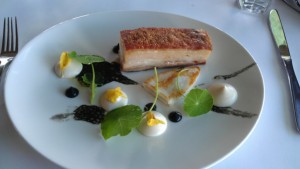 Today was started with a magnificent 2 and a half hour hike around the cape, then we decided to listen to a local who said that Cullen Wines had a great restaurant that only used its own vegetables from its garden, sounds great yeah? Well it really wasn’t, I decided to order completely vego in keeping with the concept, this was a first for me! We both ordered ‘goats cheese soufflé with baby peas, rocket and pesto’ it was a twice cooked soufflé which was the first surprise then as I was getting over that I took a bite of the peas in the rocket pesto and holy fkn Christ that shit was the most bitter chemical tasting shit I have ever eaten, so I happily ate around it and when they cleared the table I politely told them I think someone may of added the wrong ingredient to that pesto as it was inedible… they went of to the kitchen to find out and came back with this answer “it was rocket picked fresh from garden this morning, and that’s what rocket tastes like”… no it fucking doesn’t you bunch of organic hippy twats, that’s what fkn soap tastes like not rocket, I couldn’t give a flying turd whether it was picked this morning or if you haven’t washed for so long that it grew out of your fucking ears… now that is what I wanted to say, what I said was “thanks it must just be our palate” I literally have no balls ☺ my main was a couple of slices of shitty haloumi with some veg (sound boring as shit, well it was) Lauren had some tasty prawns which where meant to come in a creamy coconut curry, well unless organic coconuts are red then I reckon it was tomato kasaundi most likely made by Goan cuisine, hence why it actually tasted good. So as you can see I don’t recommend that place.

With less then a day left of this amazing holiday, I can’t help but think that food is what drives me, food is what makes me happy and getting to share that with someone else just punctuates the point that foodisthebestshitever!!!!

2 comments on “Paul’s Caul, typos and all… and more photos to boot! Holidayfoodisthebestshitever (part 2)”