Today, I and my five stalwart work colleagues decided to brave the onslaught of Christmas cheer and have a Christmas luncheon. (Well it was just an excuse to get on the piss really, but I love the word luncheon so thought I might take the opportunity to use it here. Twice.) We could not have chosen a better location for it as it turned out! Well, perhaps we could have – the moon maybe. But It was a balmy 26 degrees and a slight breeze playfully ruffled our hair and blew unattended napkins to places napkins are not supposed to go. As we were shown to our table on the balcony of the Bavarian Bier Cafe (this time it is the actual wanky word bier in the cafe’s name) we observed the little people rushing around below us. And by little people, I don’t mean the height challenged, I mean the type of disdainful snobbery that rich people use when describing peasants. By now you should be getting that annoying feeling that you’ve read this post before, kind of like that feeling you get when you suddenly have a roving itch and you don’t really know where it is but you just know that you have one somewhere.
This is why: I had written a post a few months ago about Little Brussels in Canberra where I had a jolly time with my girl chums. Ah, I see realization dawning upon you now – and if not, continue to wonder or go back and find the post of which I speak. You’ll be glad you did. Trust me.
Anyway, if you did read that post, you’ll remember that I really like a good porking. And an awesomely good array of pork is what you’ll get at any cafe that offers European beer and Germanic style food. I must say though, that nothing beats actually going to a Bavarian bier cafe IN BAVARIA! The bier somehow tastes more biery, the pork somehow more porky. Anyway, after my experiences in Bavaria and Germany and the excellent Little Brussels cafe in Canberra, I was all set for the same experience in Brisvegas. I ordered my beer and half a pork knuckle. The beer was a delicious blend of hops and malt and that’s all. Which in these times of boutique beers flavored with coke, caramel, creme of sumyunguy, or some sort of berry, was refreshing. I was looking forward to the pork knuckle to complement the beer. I’d gone the pussy half knuckle option as it was lunch, a work do and in my experience, a whole pork knuckle could feed a starving nation for years. 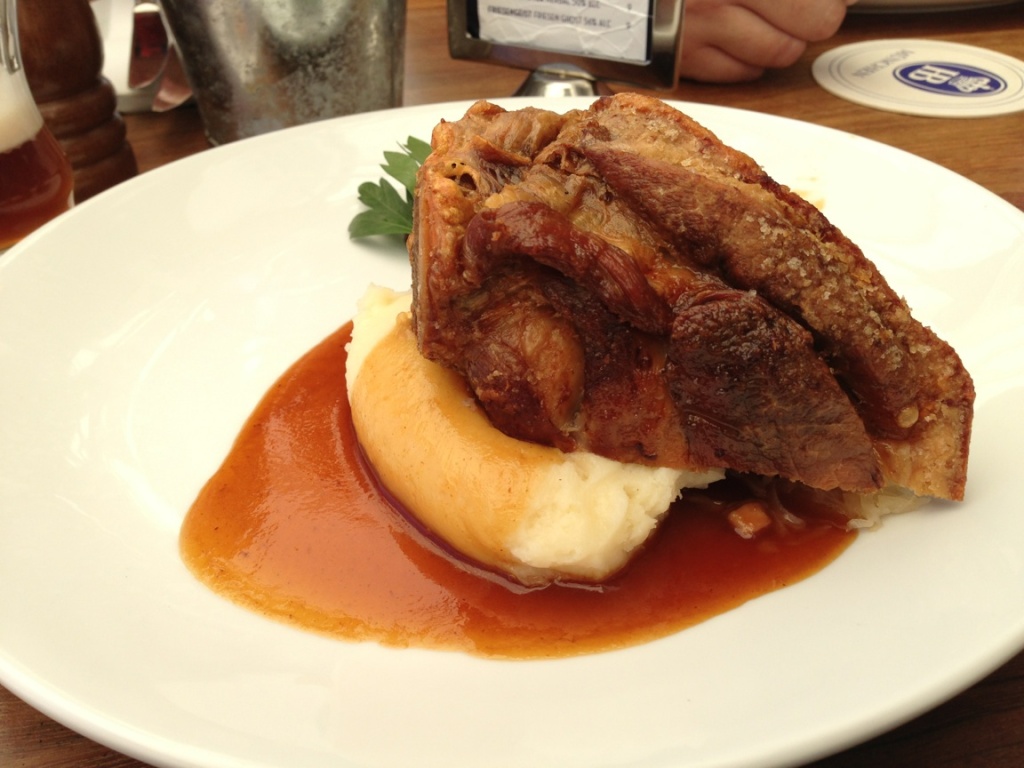 Now in a perfect world, it would have come out looking like half a porky globe on a Snow White bed of mashed potato with lashings of sauerkraut all doing backstroke in a pool of dark bier jus. Did I say in a perfect world or in my head??
What came out was an unfortunate testament to a lot of a la carte dishes that I have had at “up market” establishments. A half pork knuckle the size of a small smoked hock was perched on a small quenelle of whipped potato and sauerkraut. A small dab of jus almost surrounded it. I got over my initial disappointment that it wasn’t at all like the bones you’d expect of a medieval feast, and dug in. The potato was delicious and so was the jus and sauerkraut. I cut into the pork which, to the chefs credit, had awesome crackling. But where I was expecting juicy meat falling off the bone under the crackling, I found it to be quite dry and only juicy very close to the bone where the meat was thickest.
I guess if I considered the surroundings, which was a snobby upmarket restaurant precinct, it was an appropriate dish. However, what I was looking for was a Bavarian experience and having been to Bavaria, I was left wanting.