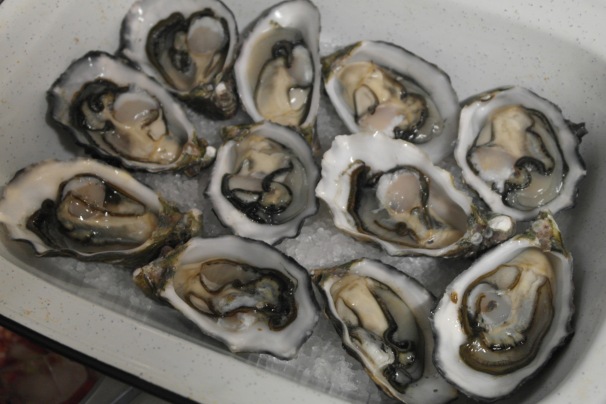 As promised after the oyster fiesta while on holiday in Iluka, here are the recipes for the garnishes we had with them, plus (there is always a plus here with foodisthebestshitever folks… always a plus. Stick with us and you’ll be fine. Except in the case of an apocalypse, in which case ain’t nothing going to save you!) you get the prerequisite amusing anecdote, and only here on foodisthebestshitever is it the norm for that amusing anecdote to have approximately zero relevance to the actual story.

On with the show…

Recently I was flicking through the channels on the picture box* and I hit a show with a crazy English bird waffling on about oysters and the dislike she thought she had for them, and how tewibbly ugaly they are. Bloody hell, I thought to myself. But then she goes on to discover they are actually very tasty and delicious and have as much a place in your mouth as any old sea farers co… c… whoa up there Nelly. Point being; I want oysters and I want them now.

I want oysters all of the time. Freshly shucked, still in the shell please. I want to know they’re fresh and I’m pretty keen for different flavours. The only problem here is that my oyster fetish seems to have been inherited by my son, Seba, so you’ve got to try and get a few in before he notices they’ve hit the table. Life could be worse that’s for damn sure. Anyhoo, today I figure I’ll make a couple of dressings just so I have to get a pile of oysters to try them out!

Does this story need more dragons?

In honour of oyster lovers and dragons everywhere today we shall be trying the legendary Oysters Rockafeller, and we’ll also have them natural and with a chilli, soy and shallot dressing.

1 long red chilli, deseeded and diced as small as you can go

A squeeze of lemon juice

A splash of olive oil to bring it together

Popeye would be proud. Muscles would be popping up all over the place…

Not bad at all

Adapted (with what I could get hold of in a small sea side town) from Janni Kyritsis’ recipe in the “Sydney Seafood School Cookbook”. Well worth a read PS. The story is mine though…

A while back I was speaking to my friend Amanda, who was living the dream in America, and she was telling me that she was in love with, and slightly addicted to (they kinda go together I guess), Oysters Rockerfeller. Them and cowboy boots, but we’ll concentrate on the oysters for now. Her obsession made me really curious about the Rockafeller and I feel now is the time to let that curiosity flourish.

1 stick celery from close to the center, diced

A splash of pernod

A splash of tabasco sauce to taste

1 or so cups fresh bread crumbs

Some other things that go great with oysters;

And if you think you don’t like oysters I’ll say to you what I said to my mate Micky many years ago; “Don’t be a fanny! Try the effing thing.” Micky now has a-plate-a-day habit and he’s never looked back.

*picture box. TV. Television. Called picture box by crazy old ladies with a house full of cats and one guy that I worked with. In the same category as the wireless radio.