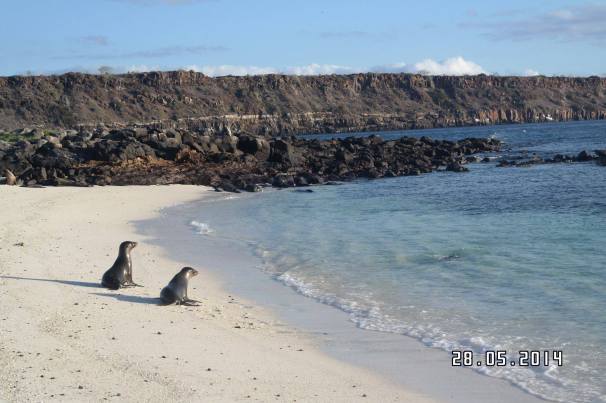 I’m not someone who has formulated a list from early age outlining places in this world in which I want to visit… but if I had, then the Galapagos would most certainly been right up there at the top of the list. So it’s safe to say I was beside myself with excitement the morning we set off to visit said islands. Even the insane jet lag which had put a stop to any form of sleep or rest didn’t hinder my ridiculous smile. I was not alone with this giddy feeling, any one of us visiting the islands that day had got there because we really wanted to get there. It’s not like you just set off to get some milk from your local shop and next minute your patting giant tortoises on an island in the middle of the Pacific Ocean… no it has to be well planned and executed otherwise it wouldn’t be happening.

Within one hour of landing in the Galapagos we where on our first trip to visit the Giant Galapagos Tortoise’s, and we where not let down. These giants live up to 150 years old and are as cool as you get, they just look at you as if to say “Hola amigo’s Buenos Dias”. They are a look into the past, they are the reason places like this should get looked after and treasured. And before we knew it, we where up close and personal with several 140 year old plus Giants. I’m not going to try to describe this situation as it was way to cool for me to convey in words so I will offer a picture instead.

One of these people is Paul, the other one is a giant fucking tortoise

But regardless of how incredibly exciting this all was we where getting hungry, which for G-money and I simply meant just that, but for Lauren (and Carla to a lesser degree) that means something completely different. Think of a scene from the hulk or maybe you’ve seen a documentary on Badger’s and seen just how angry they are once prodded, then times this by ten and that describes Lauren when hungry. I’m not a religious man but I did ask whatever deity cared to listen, that they would allow food to cross our path soonish as to appease the hungry ladies. They listened and we meet up with our boat where our lunch was served, we are staying on a mini cruise ship that sleeps 6 couples in private en-suite rooms, the food that they serve is exactly what is needed. Its tasty, its simple and its nutritious, it may not win any awards for originality but when you’ve been walking around extinct volcanoes all day then a nice salad, some rice and a tasty fish curry is bang on.

So with the girls back to their lovely self’s again we set off for some skin diving (snorkeling not love making) and holy shit it was good, fish as far as the eye could see, so many different kinds. I have to admit I do look at some of the bigger fish and think to myself “I could stuff that fucker with a shit ton of lemongrass, ginger and coriander and bbq the fuck out of it” and then I drift back off to the peacefulness of the pristine waters of the Galapagos and get lost in the natural beauty, sans seasoning.

I came to this place with a list in my head of creatures I wanted to see, Tortoises of course, but marine Iguana’s and sea loins were also on that list. So when we where taken to a small island later in the afternoon that had the final two on my list… well to say I was chuffed just doesn’t cut it… I was a trigger-happy mofo, no bullets only images in my weapon of choice, and hunting of this kind is literally like shooting sea loins in a barrel. Everywhere you would point the camera gave you a picture from National Geographic, this was definitely one of the best days of my life and surprisingly it didn’t revolve around food… however food did pay the bills that got us here, so food is still the best shit ever, but the Galapagos islands are a wonder that is without equal.

Something else that seems to be without equal is just how many facts our travel companion G-money has inside his mind. I pride myself on learning and then in turn boring the tits off people with my redundant knowledge… but all of a sudden I feel a little empty inside as I have to take a back seat on the knowledge train… so if anyone wants a really knowledgeable travel companion I have just the man for you. Just kidding you can go find your own friends you weirdoes.

This is Darwin Bay; a 3000m volcano that has filled with water

The two days that followed didn’t disappoint, rare birds only found here are Omni-present, I’d be more impressed if you could take a photo without a goddamn bird in it. We would ride a dingy ashore walk around a volcanic landscape filled with scenes that I had seen on BBC doco’s since I was young, whilst I’d seen pictures before nothing is quite like seeing all the shades of green and black volcanic rock broken up with the red inflated chest of the Frigate and the playfulness of the myriad of sea lions pups playing with each other. On the final couple of snorkeling sessions we were mobbed by more sea lions than I could ever of imagined along with sea turtles and several different sharks, they seemed to just love playing with us, spinning and twirling all around us (sea lions not sharks)… needless to say that shit was uber cool.

It’s truly exhausting work as you don’t sleep much as the ship navigates for 6 hours overnight in choppy seas and during the day you dive, walk and eat. I know what you are thinking… and all I can say to you is “fuck you it is hard work”. 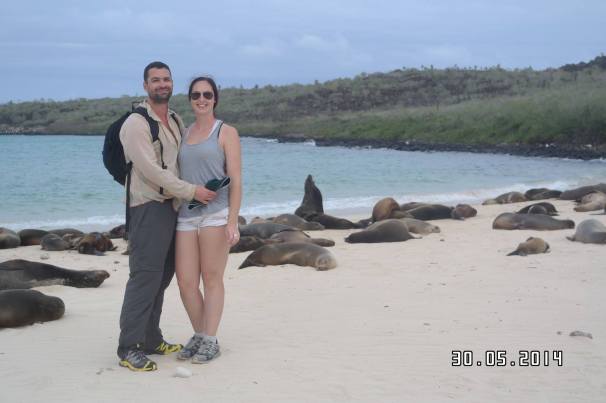 One of these people is Paul, the other one is Lauren

Meals aboard the San Jose (our boat) have been great, they haven’t been all meat and cheese like the mainland (I mean the shore not the shitty brand of Aussie cheese), cheese has made a few appearances but only in a small part, definitely not a main attraction like with the cheese mad land-lovers. The cheeses here are mostly of the squeaky variety and some of the infamous orange cheese that the Americans seem to have a fascination with. Breakys have been great with heaps of fruit, cereal and always eggs in one form or another, juice that is never orange or apple, to be honest I haven’t been able to pick what is in the juice and sometimes thankfully ignorance is bliss… and yes coffee, what would I do without coffee? Well most likely I would be a prick for at least an extra 15-30 minutes every morning at a minimum, so hoorah for coffee you sexy beverage.

Unfortunately Carla Da Bruce hasn’t been 100% during our stay, which is the only negative to this amazing encounter with a place that has a mythical quality. This however hasn’t stopped this incredible lady from joining in most activities, Carla is one tough cookie and no-one and I mean no-one can or should stand between her and baby sea-lions, the look on her face during her first encounter with a pup was nothing short of euphoric. But hopefully fingers crossed she will make a speedy recovery as we are off to do the Inca Trail to Machu Picchu next and we will all need our walking legs on (as opposed to whatever other legs we may have, perhaps sea legs is what I speak of, yes sea legs is definitely what I meant)