This tale of Brazil actually starts in Brasilia but as the capital of Brazil is a lot like the capital of Australia, its best not to spend to much time and energy trying to regale people with stories from these sterile pre planned cities. This is not to say we didn’t enjoy our time there, as we most certainly did, but as it was our first stop in Brazil and the location for our first ever live World Cup match it really wasn’t a true indication of the true Brazilian vibe.

Brasilia is a very new city only being constructed in the 60’s, Oscar Niemeyer designed it and is the capital of Brazil purely in name alone, as Rio and Sao Paolo are generally considered the people’s capitals. But Brasilia does have some interesting architecture, it was designed in the shape of a plane and some of the structures are very cool. But in-between the funky churches and government buildings are rows and blocks of office buildings constructed in exactly the same size and placed in exact rows creating a futuristic layout that removes any sense of artistic license and leaves with a sense of I may jump out of my office window onto my face. It’s a city with heaps of open space (filled with fuck all), which as a local may be nice but as a tourist trying to find a bar or restaurant, it’s very hard to get around. But we were there for a purpose and that was to see the World Cup, and to be more precise to watch Switzerland play Ecuador at the newly constructed National Stadium.

We had previously visited Ecuador so we did feel some connection with the lads but I was still hoping for the chocolate making peeps to get up, but Carla Da Bruce and G-money had caught the Ecuador bug and were adorned in their Ecuadorian scarfs and well into the chants that moved around the stadium. I think it would be very hard not to enjoy a world cup match in person as even if you remove the actual game, the vibe and energy in the place is magical… second thought removing the game may be weird and cause unnecessary trouble and confusion. Hordes of passionate, patriotic and, a lot of the time, idiotic fans travel the globe to support their team, and for the most part are great ambassadors for the sport. We haven’t come across any trouble and have enjoyed every minute of all matches, except for perhaps the 60 minutes we lined up to get into the match in Brasilia. I hate lines and people so lines of people are not for me.

Food at the matches could definitely do with an overhaul as silver packages are sold that may be the same food space men eat. They say they contain hotdogs and hamburgers but are not even close to either of those products. You could also opt for a cold sandwich, and by cold I mean frozen solid, now that’s weird by anyone’s standards. But they have beer and that is what most people want, the beer comes in cups that have teams flags on, so is a great souvenir and basically the only reason I drank at least two each match. The Bruce’s however finished each match with more cups then they could carry, well done for representing.

After a few days in the city that time forgot we were well ready to hit the sunny shores of Rio De Janeiro. Rio is a city that everyone in the world has seen images of and have expectations of what’s in store… and it didn’t let us down.

From the taxi on the way to Copacabana from the airport we could feel the World Cup buzzing around us, whistles were ever present and cold beverages were sold everywhere. Not just beers but caprioska’s (caprivodka’s as they call them) are made to order by hobo’s with carts on the streets, and they were for the most part delicious, if not a little strong, but delicious non the less (the drinks not the hobo’s). We arrived to a very cool apartment one street back from the beach and made our selves at home as it had been a while since we had our own space. This space came with a kitchen so even though I was on holiday I really wanted to cook, as cooking for me is very cathartic and soothes my soul as well as feeding my very lovely girlfriend Lauren, which in turn makes my life exponentially more relaxing.

It’s as exciting for me to go into a supermarket in a foreign country as it is to visit it’s tourist attractions, seeing the different ingredients that are staples to them yet exotic goodies to us, its brilliant. I bought a massive calabrase sausage, some delicious bacon in two forms, thyme, rosemary, snow peas, mushrooms, onions and Arborio rice… so as you can guess I was making risotto. I also bought what I thought was cream, butter and chilli flakes, the butter was as I expected, the chilli was chilli but just extremely hot (which is cool with me) but the cream was actually a kind of cream cheese. This is essentially what I love about cooking in random places. I wouldn’t usually use cream cheese in a risotto but what the hell we can make this work.

I made the risotto with the sausage, bacon, chilli and onion and finished with a shit load of butter as is my style… then I cooked the mushie’s in more butter added some chopped up snow peas and finished it by stirring through the cream cheese off the heat and pouring all that goodness over the rice. Not you average risotto but I have to say it was very pleasing to the palate. After this Lauren and I set off to enjoy some amazing gelato from a place called ‘official gelato’. They had a kick arse range of frozen goodness from fig and ricotta to salted caramel, but we couldn’t go past the coconut gelato… seriously it was exceptional, well worth the massive brain freeze I gave myself as I got it in me quicker then should be possible. 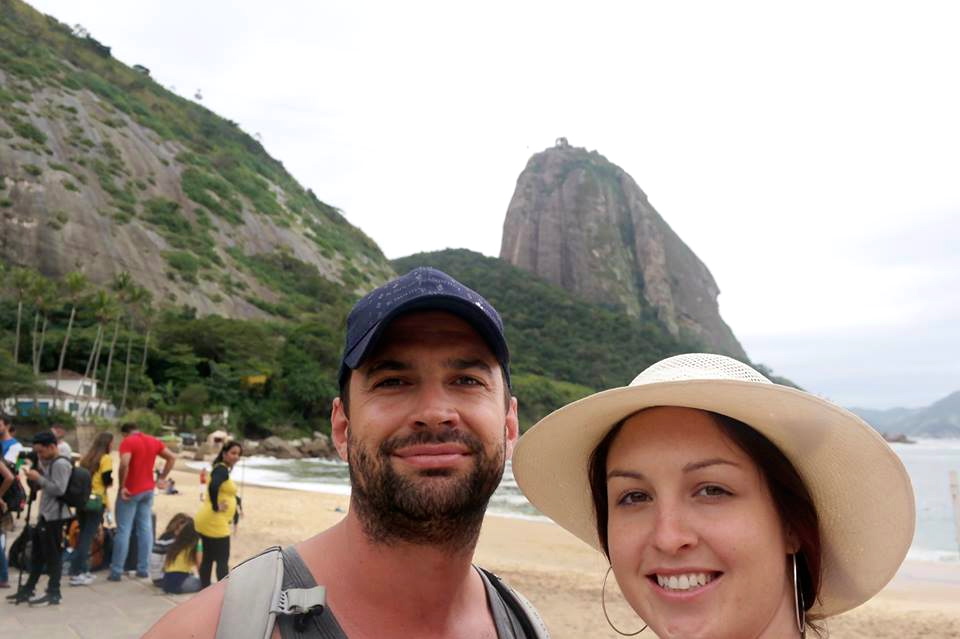 Over the next week we all experienced different sides of Rio. As I have come to realize I am getting old and soft and can’t stay out later than 10pm, so the Bruce’s flew the party flag daily and did a stand up job of it. Lauren and I went for a few runs along the beaches but alas most mornings I was content with a nice sleep in, breakfast at home followed by an adventure around the city. We tried ever so hard to do all the touristy things in Rio but with the Cup on and millions of other tourists in town it was so hard to achieve this goal. The queue for Christ the redeemer was going to take over 4 hours, so we opted for a lower vantage point, which had no queue and pleased us equally. We did manage heaps of other less line orientated tourist like activities like the Lapa steps and the Tijuca forest, which were both amazing, and basically Christ can be seen from anywhere (I of course speak of the statue not the fictional character made up by Christians).

But whatever your plan for the day was, inevitably it was going to include watching a match or two of football, as every TV had it on and everyone was interested in what was happening. We all went to the Fan Fest for the Brazil vs. Mexico match and it was mental, so many people it was close to being out of control but just managed to keep itself together. Mexicans were pouring tequila straight into ours mouths, so for the most part we were supporting them, unless we found ourselves surrounded by Brazilians then it was Brazil all the way.

We had lots of different and delicious styles of food in Rio from a traditional Brazilian dish Feijoada which is braised pork, sausage and beef in a bean braise, served with dried tapioca with bacon, sautéed kale and rice to a kick arse Brazilian bbq concept that cooked the meat in front of you a little like teppanyaki but heaps more manly with chunks of meaty goodness, accompanied by basic salads but done with a little bit of Brazilian style injected in, as they dress and serve it for you at the table/bench. In between these meals there was an abundance of ham and cheese filled pastries to eat, think of a shape and style of pastry then whack ham and cheese in it and bam, that’s what they love. Don’t get me wrong I’m a fan of ham and cheese but alas my soon to be massive gut is not.

We did find an extremely cool wine bar that was called “Abaporu” which means ‘man who eats man’. You will all be impressed that I made no gay jokes at all…. It was only a few streets away from our place so we went twice it was so good. Not only did Juan our barman make a kick arse caprioska he also spoke great English and was kind enough to fill us in on many local tips and a bit of their culture. The menu was what drew us in as we were walking around looking for something less touristy then all of the burgers, pasta and pizza that adorn menus worldwide in tourist areas. The menu was small but filled with local produce that was still very foreign to me, but done in styles very familiar. Cassava root in liquid butter, fried cheese in sugar syrup and local calabrase sausages were just a few of the great dishes that the chef owner had put together. She had travelled the world so knew many styles of cookery and had come home to give the local fair an international feel, without destroying all that is cool about it. The chef even came out and spent time with us explaining where she gets her ingredients and her ethos about the whole thing, along with the cracking malbac we drank everything about the place was spot on.

Rio was all in all a great place to be during the world cup, but I left feeling we hadn’t seen the real Rio, as the Cup is just so overwhelming, the people the noise and the intensity that comes along with such an event doesn’t allow the sprit of such a city to shine through… so perhaps another visit may one day be in order. But now we are in Florianopolis, which is a beautiful island down south in Brazil and it is such a pleasant change of pace, I’m currently sitting on our balcony looking out onto the massive lake that runs up this amazing island, Lauren is going between doing yoga and cocooning herself in the hammock, the Bruce’s are flying around the island, wind in their hair, driving a hire car… destination unknown but fun is inevitable when G-money is behind the wheel. We are planning bike rides and horse rides so sore arse’s are coming our way, and with the accolades of being the happiest people on earth, how can it be bad.