A little pig on the parilla. Didn’t need anything more than a bit of salt and pepper, some charcoal and then chimichurri once it was done.
It will be pretty nice when we’re done with all of this lockdown shit and we can do what they suggest at @eatpulpburger, and go and eat Pulp Burger.
Follow foodisthebestshitever on WordPress.com 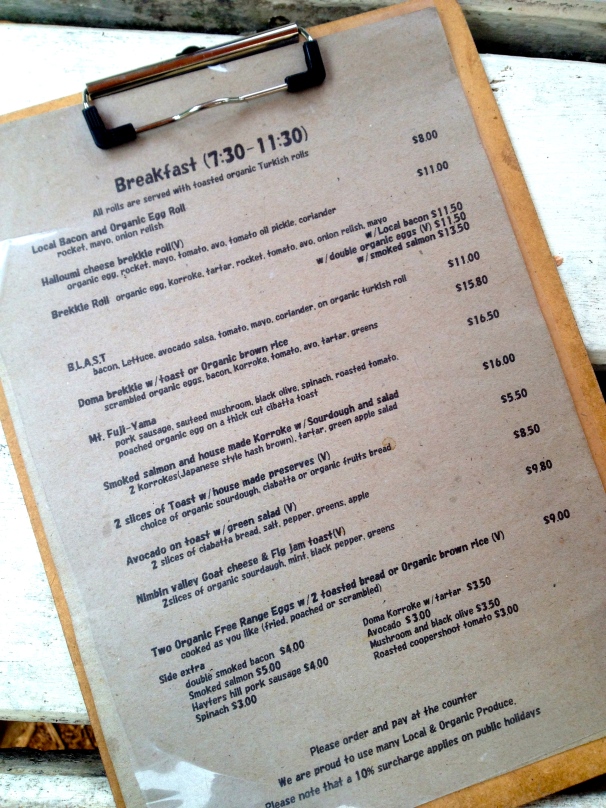 We’d heard a bit of talk about this little café in a little village in the big hinterland hills of the medium sized town of Byron Bay in the relatively expansive Northern Rivers region of New South Wales. When I say we’d heard a bit of talk I really mean we’d had excessive amounts of people asking us if we’d eaten there and these people would be genuinely surprised when we told them we hadn’t, and then they would insist to the point of almost being effing annoying that we should go there to eat.

As I had no desires to end up being pushed past the limit and get all postal on these peeps asses (and eventually be tried in a court of law and then locked away for the rest of my life in a cell with a large behemoth of a man known only as Bobby who I would eventually learn to love and later would marry and we would live our days out together in the cell we would call home), I opted for a visit to suss this place out for myself and finally put an end to the gasps and stares of disbelief because let’s face it, I get enough of those just walking down the street or through the ladies underwear section of the local K-Mart.

Get in my belly

Straight up this breakfast was damn good. These guys do such a good job with their food in fact, they don’t even worry about using proper crockery and cutlery. They feed you on disposable plates, pour your coffee into paper receptacles and you even get to eat it with biodegradable forks or chopsticks. Someone who was more at home with the “proper” way of life, with luxuries like ceramic crockery, some kind of metal cutlery and two ply toilet paper, may have kept on driving when they noticed the implements of consumption available at Doma. Why, they may not have even got out of their car to see past the vista of the old hall surrounded picnic benches and random old farming paraphernalia, but that is fine. They should go somewhere else because they are clearly simple and we wouldn’t want that shit rubbing off on us now would we. Also, it means there is more great food and less queues for the rest of us.

I had the Mt Fuji-Yama and although I expected my meal to appear adorned with a plastic Godzilla and little scared people figurines trying to escape over a pile of smoldering mushrooms, it arrived as the menu stated it would; Hayters Hill pork sausage, mushrooms, black olive, spinach, roast tomato and a poached organic egg on thick cut ciabatta toast (16.5). It was great, except I don’t really like mushrooms for breakfast so I’m not sure what I was doing there. All still cooked well and tasty, just not really my thing. Maybe I had brushed past one of those people I was talking about in the last paragraph and a bit of their stupid rubbed off on me. Not to worry, a simple life is a good life… 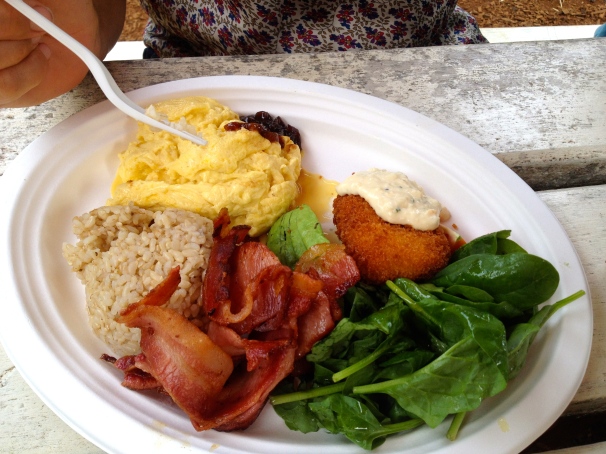 Jennee had the Doma Brekkie (15.8). Organic scrambled eggs, bacon, brown rice (a nice option for peeps who can’t do the bread thing), spinach, tomato, avocado and the secret weapon – the potato thing with tartar, otherwise known as the korroke. A potato hash brown type thing with a panko crumb that is fried so it is soft in the middle and so very deliciously crunchy on the outside, kind of croquette-ish, and then served with a big ol’ dollop of tartar. I always new the Japanese were a smart race but this… Pure genius. I am getting a plate of these things when I return. 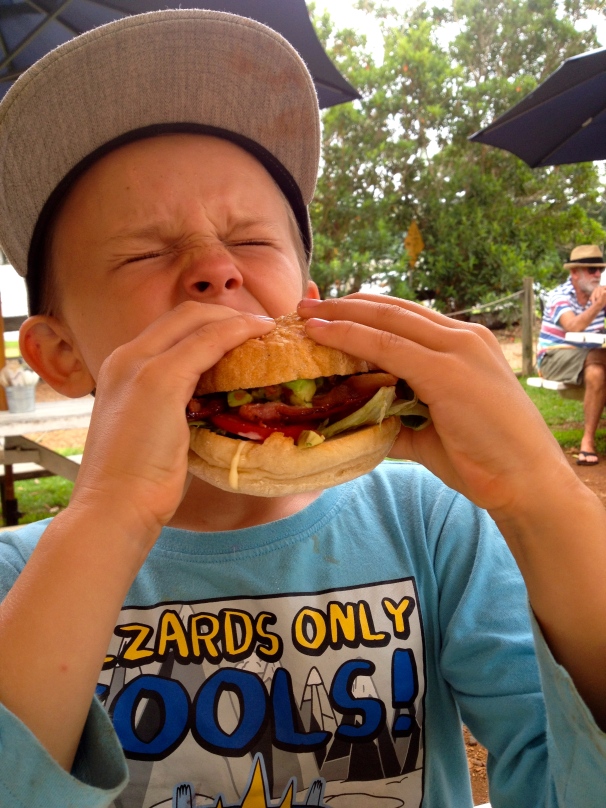 Obi went for the BLAST (11.0). Which he says “was very delicious, it looked yummy and was very tasty”. I can positively agree with everything that young man said. Wise beyond his years with both words and choice of breakfast. 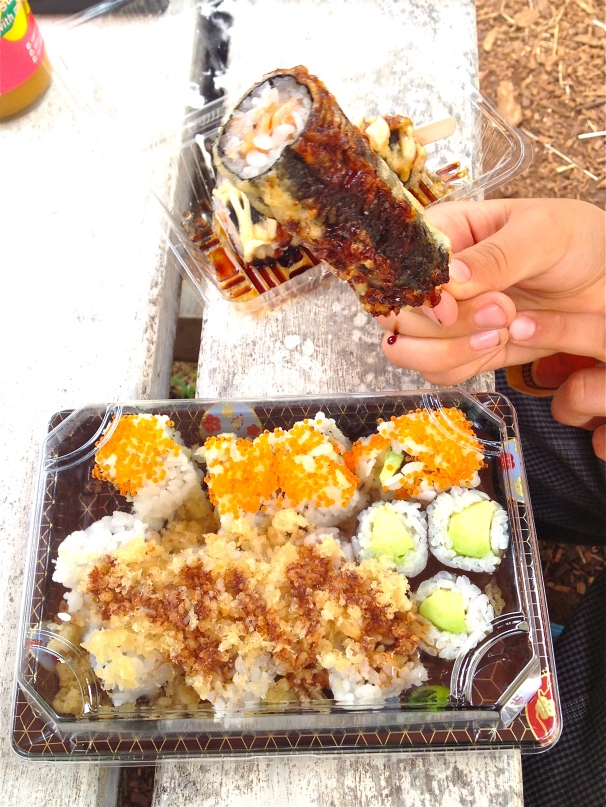 That nori collection including the tempura fish popsicle

If Obi was wise with his choice then Seba was definitely the all–time-really-effing-well-done-choice-of-the-day award recipient. He originally thought he was going for the BLAST but, when heading to the counter to order, he spied the massive pile of various nori roll creations and his smart brains (which he still had due to not rubbing up against the simple people) insisted he order a few of said items for his breakfast. It was damn good nori. Damn good. From the mouth of Seba himself he states, “it was great. I loved the fish sticks and it had mayo – my favourite sauce. The fish eggs were really nice”. That kid is born to be king!

There is a relaxed vibe at Doma and I’ve heard you can be in for a bit of a wait when they’re busy, but that’s the sort of thing you’re going to get in the country. Doma is literally nestled in the rolling hills and quite frankly, when you’re out for a casual Sunday in the Byron hinterland you really shouldn’t be stressed if your breakfast is not on the table in ten minutes. If that’s the sort of thing that is going to stress you out then you should definitely get in your car and go somewhere else. Somewhere far away from me. Like interstate.

And just to top it off this place is run by the cutest, politest crew of Japanese people. What more could you want? Honestly, these guys are so nice I would’ve given them Pearl Harbour… is that too far? It doesn’t matter. This is another little hinterland gem that is restoring my faith in the food of the area. Go there. Go there now.