I like kasundi. I like it heaps more than I like the people who come into the café in the middle of summer while you’re sweating like someone who is clearly very very hot and quite possibly going to pass out due to the fact you are losing fluids faster than any man could replenish them. I mean I could seriously put a steamer basket on my head and earn a second income as a mobile steamed dumpling seller, and chuck you what they believe to be a very amusing and original comment… something like “nice and cool in there today?”

Hehehe… A prime example of why gun laws should not be relaxed because if I had a gun these people would be dead. D-E-D, dead.

These are people who should not be breeding.

If this is something you think you would do then you really shouldn’t talk to me ever. We are not friends.

Anyway, I normally make this kasundi sans tomato… with eggplant only… no dramas, but, as I was fighting a losing battle to save the tomatoes from the bugs that seem to love them even more than I do, and the random rot inducing weather the skies have been rocking for us – honestly these tomatoes are dropping quicker than a cheap hooker when the officers of her majesty’s royal navy are in town – I thought I would get them the hell off that vine and into the relative sanctuary of my pot of kasundi.

Either way it tastes damn fine, so you do it how you want.

And if you think you don’t like eggplant then you should stop being a little girl and try this. Unless of course you are a little girl, in which case you can do whatever you like.

Serve this stuff up as a condiment with any thing curry, with fish or in a lamb burger for a funky assed twist on tradition. Or just put it in your face with whatever the hell you feel fit, it is your face after all. 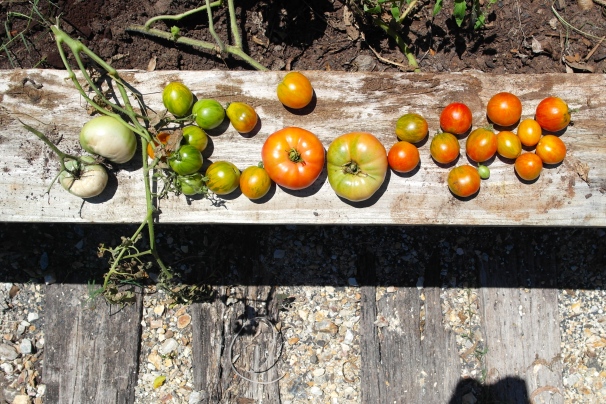 I am a virtual Mother Teresa of the tomato world

…until I chop them all up 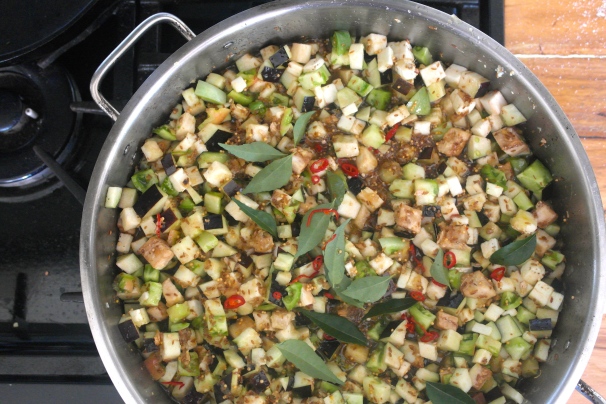 KASUNDI (makes a heap of 300ml jars, but double the recipe if you want to bulk it up to a shit load)

• Place a medium-large saucepan on medium-low heat. Add the oil and the onions. Fry for 10–15 minutes until soft then add ginger and garlic. Fry with the onions, stirring occasionally, until golden
• Dry toast and grind the spices
• Once the onion mixture is golden, add the toasted and ground spices. Fry for 5 minutes, stirring to prevent sticking
• Add the vinegar, sugar and salt, mix through to combine, then add the eggplant, tomato, chillies and curry leaves. Stir occasionally and simmer to reduce
• The kasundi is ready when it has a soft, jam-like consistency (about 40 minutes)
• Remove and cool before refrigerating until required, or preserve in jars and it will last longer than your ex-girlfriend