As promised here are the details of the third annual Stockdale vs Cootes cook-off.

By Jennee aka. The wiffy

The win was sweet.

For those of you who follow this titillating tale of culinary genius regularly you would be aware that Grazza McFilthy Mouth has married into one of the finest Queensland families that have ever existed.  Steeped in bush tradition and with a penchant for laughing in the face of misfortune and tackling the world’s problems head on… or at least heading to the pub to discuss such problems… or at least heading to the pub.  You would also be aware that we are competitive. REALLY competitive.  My brother (Queenie, “the number one”) was so competitive as a kid, I would get him to fetch me stuff while I sat on the couch, as I timed him (well, pretended to), on the premise that he should try to beat his previous time.  This worked until he was like 13 years old and the general malaise and discontent of teenage life kicked in and he realised that I was really the only one gaining anything out of this “competition”.  But anyways, since the uniting of my two families, old and new, we have created a cooking competition between said families that if aired on prime time commercial television in Asia would pretty much knock this Masterchef bullshit off its ratings arse!!!

The annual cook off between “the Coates’” (my maiden name, for a fair maiden) and “the intruders” was set and menus were deliberated over in secrecy and hushed tones.  The judging panel was invited and the gauntlet was set. Usually “the intruders” are called “the Stockdales” but this time with the addition of my sister in law (a Polish Jamaican throwback with lily white skin and a steely stare) the name just didn’t fit.

The pitch was wet the night of the event and injury was rife in the Coates team, Queenie was recovering from a nasty case of the man flu and I was nursing an horrific toenail clipping disaster.  But we soldiered on.   The judging panel arrived and witty banter and fine wine soon ensued, or at least a cracking round of piss taking and homemade scotch was engulfed.

It was decided on the night that the winning team would write the blog post, so here it is. Yes the Coates’ won, like a well-oiled machine we fried our way to glory and the winners circle welcomed us back with open arms, like the family of a junkie after a long stint in rehab.

The menu was as follows: 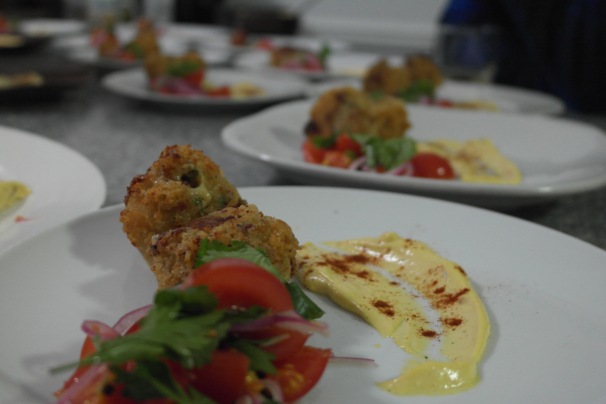 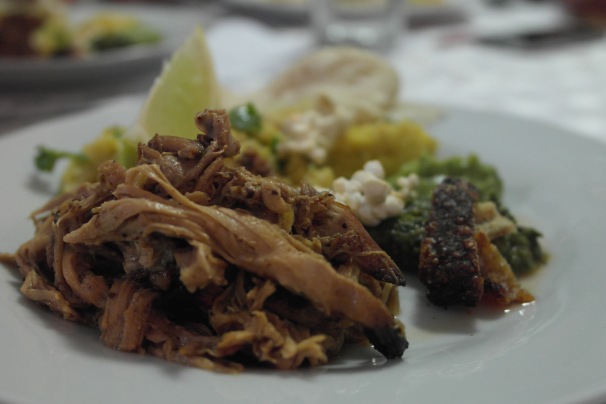 Two photos for the winning dish

We were pretty damn inebriated by this stage so this was about the best I could do, sorry folks

I am pretty sure the dish that won the night for us was the pulled pork dish, Queenies idea so kudos goes to him. Here is the recipe.

Grab a pork shoulder with the bone in, about 3kg

Rub it with 3 tablespoons each of ground cumin, coriander, paprika, oregano, 1 tablespoon chilli flakes and season with salt and pepper.

Put it in some kind of baking dish skin side up and add 1L of orange juice, then put it into the oven at 90 degrees for 12 hours.   You could then get up every four or so hours to check it, or in my case you could marry a boy who is totally in love with food and actually can’t sleep with the aroma of pork slow cooking so has to “check” it for you!!!! He is a sweet heart!!

9 comments on “The Third Annual Stockdale vs Cootes Cook-off”