I awoke this morning to the sight that some rude bastard, probably a local pub owner or something similar, had dumped a shit load of empty bottles on our verandah. Yeah, great start to a Monday. The place looked like a fucking recycling depot. There was ginger beer, wine, various other beers, more wine and grey goose vodka. What the hell? What sort of person would do this?

I could remember preparing a feast but wasn’t sure if we had eaten it… what the hell happened. Paul! That’s what happened.

Paul (of “Paul’s Caul” fame on this very blog) and his lovely lady Lauren had finally made it to our humble home. They arrived after travelling many miles in the white man’s metal bird, and then even more miles of travelling in a cart drawn by three small kittens, strangely all of whom were named Veronica. But these kittens, although small in stature, were strong of heart, and they delivered their fare with great speed so were duely reimbursed for their time. That’s just about enough about the three Veronicas…

The level of excitement and anticipation that I have been experiencing this past week in the lead up to Paul’s visit was comparable to that of the obese child waiting for his morning helping of chocolate cake and burger rings. Like a teenage kid before schoolies, knowing I was in with a damn good chance to finally see some real boobies. Like other exciting and eagerly anticipated things. So yes, it was Paul that happened!

It has been many years since Pauly has ventured to this side of the country. In fact, the last time he came to stay was when Jen and I got married, some 8 years ago. With this in the front of my mind I had prepared myself both mentally and physically for the oncoming onslaught. I had been intensively training in the ancient arts of drinking and eating, and also dabbled a little in the lesser known art of gerbil throwing… one can never be to sure when Pauly is involved.

I should have trained harder.

You see, many years ago when I first met Pauly, he did not drink so much. Once or twice a year, maybe at my birthday or Christmas, he would pop over with a six pack of corona, slowly sipping away at one as I knocked off the other five. Oh my how things have changed. This guy truly believed he had been wronged by my liver in another life and was out for some serious vengence. And what does Geppetto have to do with any of this? Absolutely nothing except that Paul is sitting across from me on his MacBook (not actually sitting on his MacBook as that would most likely render it unusable) typing his account of events from last night and poked his little head up and asked me “how do you spell Geppetto?”. What the fuck that man is talking about is anyone’s guess at the best of times, but Geppetto? Bloody hell man.

I know we cooked a cracking dinner of pork belly (mine was roasted a la natural with the famed three flavor sauce, which Paul declared was ridiculously good and affectionately named it “crazy sauce”. Paul did his with a rocking spice rub and offered a side of sweet potato and lentil curry) that I would’ve enjoyed eating for sure, we drank a lot (the 97 blurry assed photos on my camera are proof of that), and good times were had by all (see 97 blurry assed photos)… and the gerbil is still alive and kicking. That’s all I’ve got.

I seriously can’t remember much more then that. I could make some shit up, which wouldn’t be too far away from my usual form, but I’m just not going to.

The chiminea was amped 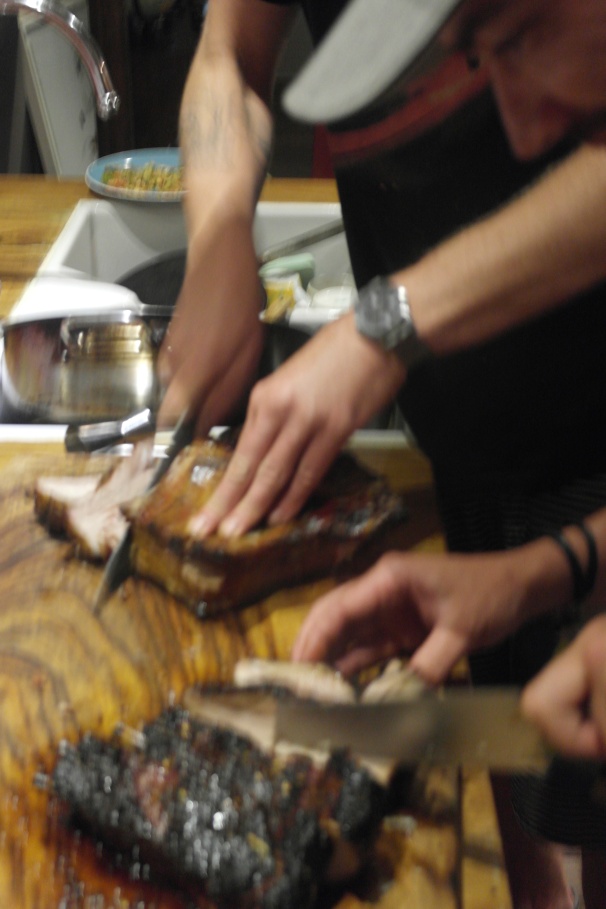 This photo shows that we cut the pork, but I don’t remember doing it 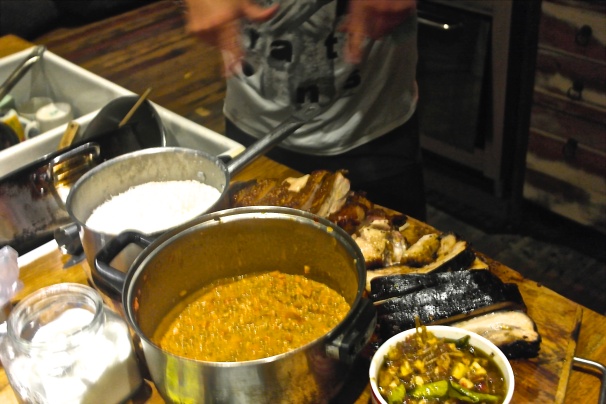 Real men eat out of pots