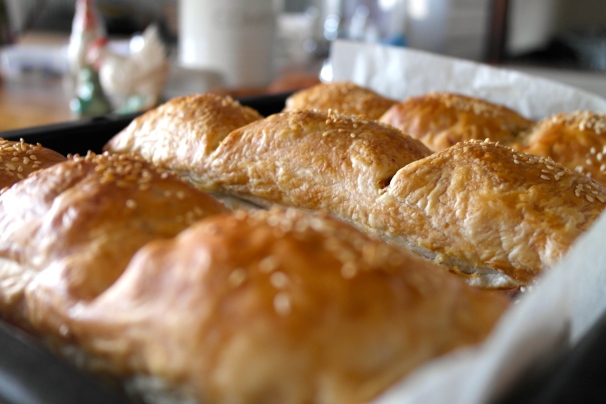 Just a little FYI; cooking for kids is totally different to cooking four kids (I know the more astute amongst you may be raising your eyebrows right now at my barely copacetic use of the English language and this little jab at the less grammar inclined amongst use, but fuck, even I can sort out that kind of English so I’ll take that little jab at whom ever I want). While the former is widely accepted as an almost (oh yes I did mean to say almost. Wittysocialcommentaryisthebestshitever) daily occurrence for most parents out there, the later is, well, more a project that would be appropriate for a family gathering of cannibals or other like minded beings… possibly with a penchant for the human veal…

I shall end this short foray into the world of illiterate cannibals quickly though, as I have no desire to find myself under investigation by the AFP… again.

This is some damn easy using up your left-overs but still maintaining a sense of cessation from the original meal type cooking, and let’s face it; there’s not many things out there that don’t taste damn fine wrapped in puff pastry and baked in a moderate oven for 20-30 minutes or until beautiful and golden. All you need is some frozen puff pastry sheets, some left over vegetables from last night’s dinner (like you would use for bubble and squeak or hash if you were in the US of A), some leftover roast meaty goodness or a bit of bacon, cheese, an egg and about 15 minutes to put it all together. 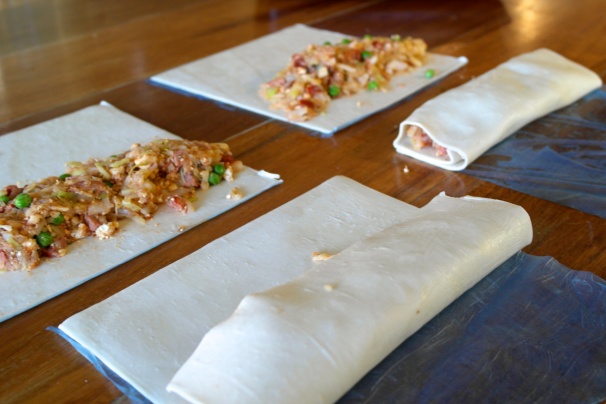 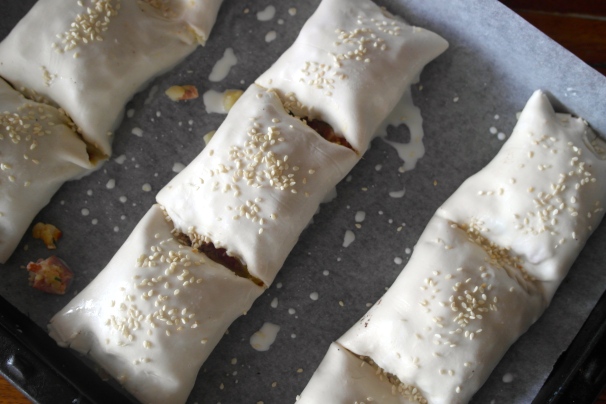 Cut into two or three sections per roll, egg wash and hit them with sesame seeds 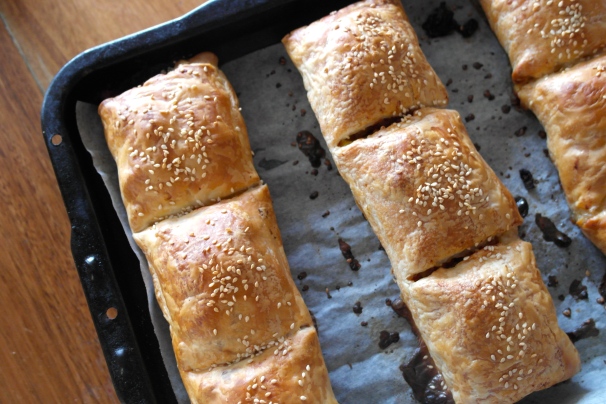 Bake for 20-30 minutes, or until they look just like these

LEFT-OVER ROLLS FOR THE KIDS (and you too, if you’re keen)

• Preheat oven to 180C
• Take the pastry sheets out to defrost
• Combine meat, vegetables, cheese and egg, and give it a good mix with the fingers on the end of your hands. Mush it up a bit
• Divide the mix between the four sheets of pastry just like the pictures show you
• Roll into big sausage roll type things
• Transfer to a lined baking tray with the seem side down, and cut into 2-3 segments per roll
• Beat egg with a splash of milk
• Use egg wash to baste the rolls, sprinkle with sesame and bake for 20-30 minutes until golden, puffy and delicious smelling

14 comments on “Left-over Rolls for the Kids”