When the side threatens to outshine the main.
Well that was a bit of fun.
Follow foodisthebestshitever on WordPress.com 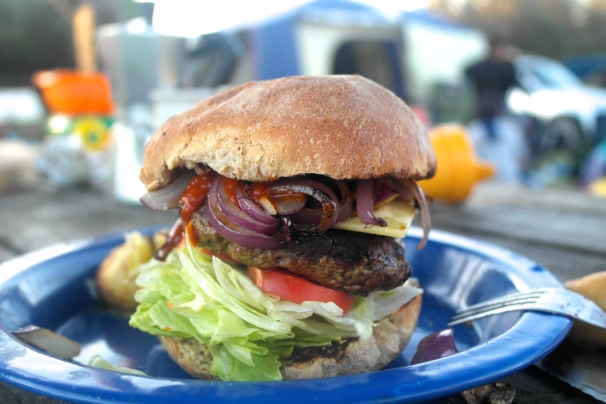 As I had previously mentioned, we were to venture out into the wilderness on a family camping trip. Our tribe, plus four other families all followed by their own respective broods of small humans. I wasn’t totally sure if we may be setting ourselves up for disaster, but one thing I was sure of was that we had brought with us enough booze to self medicate even the most treacherous of feral child, Lord of the Flies, type scenarios that these kids could throw at us.

We arrived at the Black Rock campsite via the convenience of modern technology, the metal chariot we fondly refer to as the automobile. Uponst our arrival we immediately set about the task of erecting (heh hem) our ready made, easily transportable, space saving, comes with a free set of steak knives, campsite. Thereupon I was greeted by an old friend; as we unraveled our tent from it’s cob web coated shroud the wafts of stale campfire smoke filled my nasals. To some it is a musty smell that reeks of a stale manifestation of unattended mould spores, but to me it is a fond memory of great times. Great food shared with great friends and cooked in what can only be described as a great cookhouse; an idealistic kitchen forum with a back drop of nature’s most awesome glory… and nary a gimp like, peg legged, old man in sight… it is true I have worked in many questionable kitchen situations. 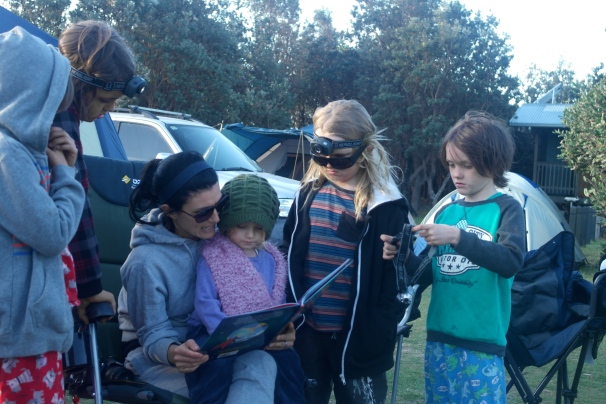 This is story time at the campsite

We ate beetroot leaf pizza scrolls that Jennee had the forethought to prepare prior to our leaving home, followed by a swim in the river that was nothing short of invigorating as the river had declined the offer to follow the sun in its warming of the new season and sat not one single degree above damn cold (whether in celcius or fahrenheit), followed by my personal favourite – the lighting of the fire ceremony (entirely clothed this time, as we were in the company of other families who had small children who were not fully accustomed to the beast that is “camping Grazza”), followed by the drinking of the beer (another personal fave), followed by the cooking of the dinner. Tonight it would be burgers, just because that’s how we roll.

Get in line for the camp kitchen 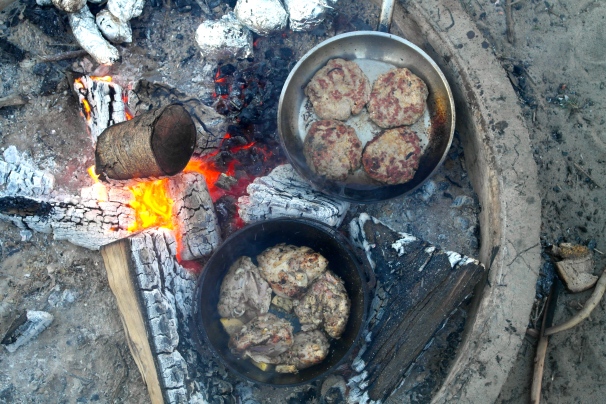 Cooking on the fire really does not suck

Beef mince pattie seasoned with paprika, sumac and a heap of salt and pepper, lettuce, tomato, cheese, fried onion, mayonnaise nazi homemade mayo and bbq sauce and a few jacket potatoes on the side.

There may be a fork on the side of this plate but that was for the roast potatoes. Please believe me when I tell you I am not some kind of nutter who eats a burger with a fork… while camping for effs sake

Now I am in bed and writing to you with a pen-on-paper type course of action, with nothing but the illumination of a small battery powered lamp and the company of my youngest little man, Obi.

I am going to go and pee outside ☺