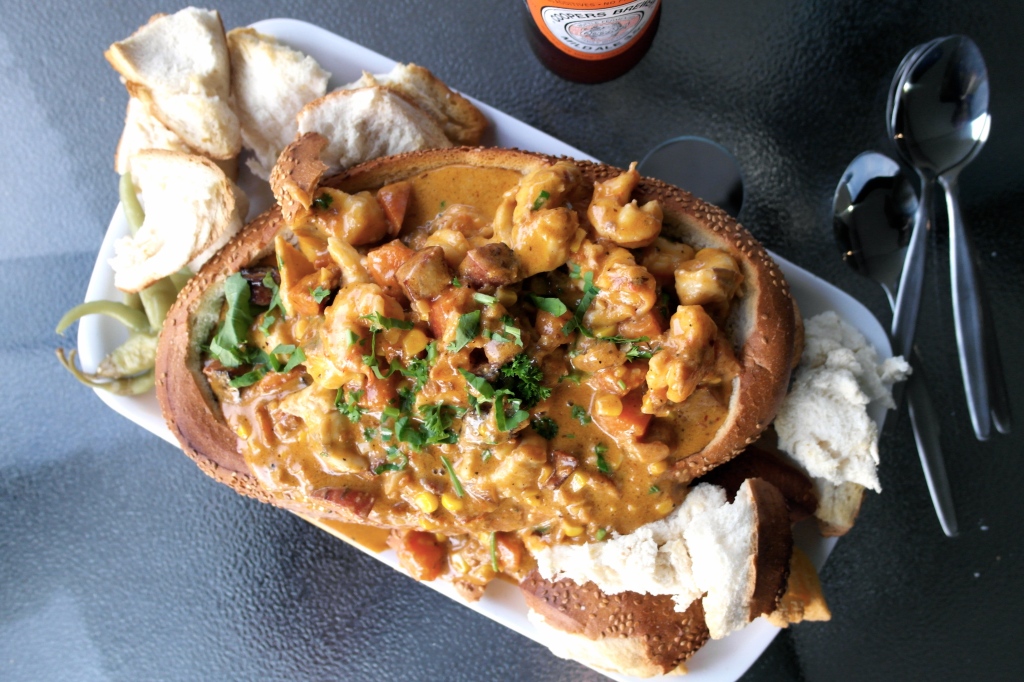 My brother is just about to head back to his humble grotto in Margaret River, Western Australia, after a mammoth stay of two months. That’s right, now I shall be in charge of my own mis en place again… and we will have to do our own washing… I’ll be sad to see him go, that’s for sure.

But before he makes like a tree and gets out of here we needed a little man time. You know, get a couple of lads together and find ourselves a little riverside cabin where we can eat, drink, fish, wear the same clothes and not make our beds each day if we did’t want to. Power to the man eh? That’s right, the new man power revolution begins with us and it begins right here, today, now! Viva la revolution. Viva le revolution! Also please note, the revolution will end at approximately noon on Wednesday when we shall be returning home, so our office/support group will not be taking any calls from that point onwards…

So I did find us a nice little riverside cabin in the sleepy seaside town of Brunswick Heads (known as Bruns to the indigenous community). It had enough beds to ensure that only two of us need sleep together (I won’t explain that one), a small kitchenette that would enable us to prepare food and stay nourished for the length of our stay and a shower, which apparently was not needed and took up valuable space that could have been used to position a cracking barbecue/smoker set up.

We caught some fish, a couple of which spent less than an hour out of the water before they went into this Creole-esque type seafood number. Kind of even a bit of a chowder… maybe. I really don’t know what to call this bad boy except damn tasty. It was taken to damn-tasty-town by the addition of some of my patented Big Red Rub, which travels with me everywhere like a faithful side kick, adding flavour boosts to food like this and generally making me look a lot better than I actually am. Which is not actually a very hard job so maybe I am giving it a little too much credit…

We did scour the shelves of the one little bakery in Bruns for the cob loaf that this chowder-y number was going to fill, but alas it seemed that there had been a run on cob loaves that morning and we had well and truly missed out… so a crusty, white, $3.10 vienna loaf was going to do the job for us today.

• Cut the top off the crusty loaf and hollow it out a little. Tear up insides and top. Get that puppy extra crusty in the oven at 180C for 10 minutes
• Sauté chorizo, onion and garlic in a little oil until starting to brown
• Add big red rub, prawns, sweet potato and corn and cook out for 1 minute
• Add cream and simmer for a few minutes until slightly reduced
• Add fish and stir to combine. Don’t play with it too much now because you don’t want to break this fish up
• Simmer for another few minutes until the fish is cooked
• Season
• Pour into the crusty loaf, top with cheese and parsley and serve with extra crusty bread and pickled chillis on the side. Best consumed with a lot of beer
• This would also be really effing good on some rice or even pasta