It’s cold again… or still. I could take a photo of the weather (or maybe just the tribe of eskimos who have set up their camp in the corner of my yard and, to my surprise have been living off Icelandic ice fish ever since) but that would just be stupid and contrary to popular belief I am not stupid. Maybe just a little simple… or maybe not. Nah, simple is like tying your shoelace after 23 years practice, or scoring some weed at the Nimbin Mardigrass (this is an actual event PS), or cooking a dog to medium-rare in a hot car…

Good weather for some Mexicano style chilli thing I hear you say. Or maybe not. I guess their climate is not exactly cold and wet is it? No, they seem to like their food hot, and their climate hot, and their women… well Penelope Cruz, need I say more. What? She’s not Mexican? She was in a film called “the Mexican”. No? eff it… I’m fully shit at this. My ignorance is clear now, yes? I’m not simple though…

Look behind you, a dingo. It’s got your baby…

So the fact that I really don’t know anything about Mexico has been brought into the spot light. I admit it. I know nothing about Mexican food and culture (I could tell you a couple of things about tequila though). And also, I really mean no disrespect to anyone right here. I’m sure those little fuckers would love me.

And I do know that they cook great food because I’ve seen it on TV.

Which begs the question. If they cook such good food why the hell would you want to keep them out of your country? If I was America I would not even bother patrolling that border. Gosh, it’s not like they’re gypsies or something. In fact, I would send them all an invite to grab all of their recipes and someone who looks like Penelope Cruz, and come the fuck over and live with me…

NACHO BEANS made by a gringo

Firstly, it needs to be reiterated that I am a white guy putting together some flavours that seem Mexican to me. This is not a Mexican cooking bible. I don’t even know if they eat nachos. They were probably created by some white guy fast food chain owned by coke back in the fifties…

Secondly, you need to be able to make some kinda guacamole. If you can see, you can make this. Diced avocado, tomato, red onion, coriander (and a bit of basil today), seasoning, lime or lemon juice. Or, if you don’t have any eyes, do as my good friend Gitana does, and serve half an avocado with some lime juice and salt and pepper. Kick-ass.

Thirdly, make some nacho beans.
1 brown onion, peeled and chopped up all dodgy as if you were at a roadside stall
2 cloves garlic, crushed
1 tin crushed tomatoes
1 tin red kidney beans
1 tin refried beans
1 tbls dried oregano
1 tbls cumin seed, roasted and ground
a pinch dried chilli flakes or half a fresh chilli, chopped
a chopped capsicum if you want
1 bottle of tequila
a case of beer
limes for the tequila and beer
• Sauté the onion and garlic (and capsicum if using) until starting to soften. You’re starting to get quite good at this now. I guess there was hope. I shouldn’t have said those things. Sorry.
• Now add your oregano, cumin and chilli and cook out until fragrant
• Have a shot of tequila
• Add all of the other stuff, and give it a good stir. Cook out on low heat for 20 minutes, adding 50-100ml water if it starts to catch*
• Have another shot of tequila. Now we’re talking. Ole
• Have a beer with some lime in it. Now start dancing around the kitchen singing “La Cucaracha”. Stop! Pull yourself together. We have to get this meal to the table yet…
• Pick one of the options below and make something with your beans
• Have another cheeky shot of tequila
• Make something with the beans tomorrow night

1. Use them to make nachos. That’s pretty obvious isn’t it? Pour them over corn chips, cover them with cheese, bake them and eat them with guacamole, sour cream or natural yoghurt and jalepenos.

2. Put it in tacos with prawns and heaps of good shit. As in Mexico, employ slave or cheap labour where-ever possible. If your 6 year old children aren’t out the back smoking cigarettes, get ‘em working. 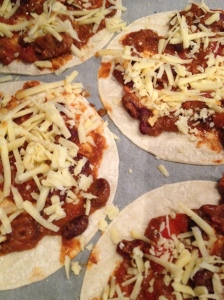 3. Make nacho tortilla pizzas. My kids love these. Heck, you can even get them to make them. See point #2.
4. Use leftovers for a wicked jaffle**
5. Have for breakfast with scrambled eggs and heaps of melting cheese
6. Add shredded leftover roast beef or chicken or pork, serve with rice mixed with some charred corn, and coleslaw

Jalepenos are recommended in all applications, as is guacamole, coriander, fresh lime and a heap of beer.

*to catch. A term we in the cooking world use to refer to the point when your soup, sauce or stew will start to over caramelise (burn) and stick to the bottom of the pot. Hence, to catch.

**I’m not sure if the jaffle has made it across the world, but it’s kinda like a pie, but made with bread pressed in this crazy contraption and grilled over a flame

View all posts by foodisthebestshitever

5 thoughts on “Nacho Beans Made by a Gringo”