A couple of different hot dogs that are both really good.
When a couple of good bastards get together good things happen.
Follow foodisthebestshitever on WordPress.com 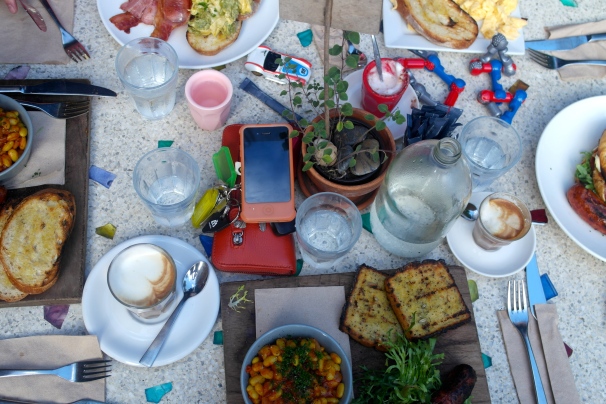 There was beans with pork and pepper sausage, pesto scrambled eggs with local bacon, the bacon and egg roll, a herb pot and heaps of great coffee on the table

We were champing at the bit, toey as a roman sandal and keen as general mustard (I know the combination of those words does not paint a pretty picture… well, it doesn’t paint any type of picture at all does it? No, it would need a canvas and some paints to do that, wouldn’t it. And, as I am referring to words that have nothing but this 2D form I have breathed into them through the power of my life giving fingers, I would suggest that this would be one dimension short of allowing them to paint that picture. Just saying) to head back into Bangalow for breakfast on Tuesday because;
1. We were going back to Utopia Café after three and a half years of abstinence. This is the same café that I left all of those moons ago after a five year stint as head chef, but I am not so shallow as to let personal differences keep me from good food… it’s just that we had heard many similar reports from people we knew aka. Friends, who were nary happy with the standard of food being produced. The café had changed hands twice and is now onto it’s third owner since my departure… cheeky little tart of a café! Anyhow, I have heard nothing but good reports about the new owner and chef so time for a visit it was.
2. We are easily excitable.
3. We are just easily excitable.

So we walked into the café so ready to have the pants impressed right the fuck off us… quite literally if that was what needed to happen. We approached a waitress who inquired as to whether we would like take away coffee. “No thank you my dear lady”, I replied in my most proper of voices. “We will be requiring a table to sit down at to sample some of your finest breakfast wares.”

On that note, I showed her my monocle…

“I’m sorry”, she replied. “But the kitchen is closed today for routine maintenance, so we can only offer you coffee or pre-made sandwiches.”

So after a brief discussion about what place of cooked breakfast meals we would venture on to, maybe Old Byron Town – maybe somewhere else in Bangalow, and a heap of me just moping around the place with my “whatever the fuck” thing going on, Jennee decided that we would head on down town to Town Café.

We were seated and then offered menus and water, both of which we accepted happily.

Our waitress seemed a little off point on this particular day, not knowing heaps about what was going on, specials etc. She suggested that pancakes might be on the specials this morning, but there was a hotdog and soup too… but maybe they were for lunch…

An early morning chuckle is always a good start to the day… but where’s my fucking coffee (yeah. I’ve still got a bit of attitude)? Ah, there it is. Thank you very much my good man. Delicious. Really effing nice. I’ll have another por favor.

This was a cracking breaky roll. They got it all spot on. I ordered a pork and pepper sausage on the side, which was one of the best decisions I made that day

And then we ate.

It was a cracking breakfast and I feel that the crew at Town may have saved a poor unsuspecting bystander or two the sharp end of my tongue… hmmm, I guess that last sentence would imply that my tongue has a sharp end, which it does not. It was a metaphor, if not a totally unclear one – even to me. Maybe I was referring to my razor sharp wit. Yes, that will work fine with me. 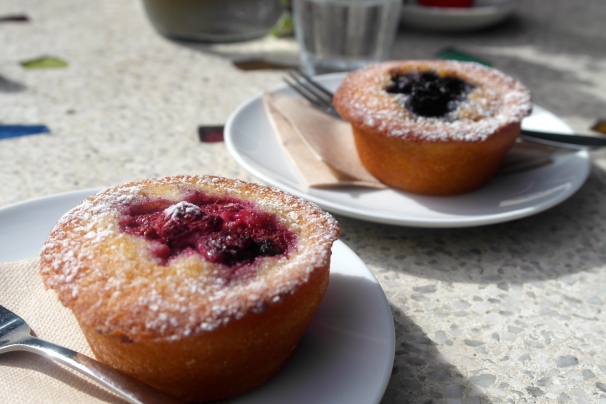 Ordering the friands was also a very smart decision

Anyhow the coffee was great, the food was great (it was all about that pork and pepper sausage for me) and the waitress was funny… and once more those same cheeky little effing friands made fun of my face from the counter, so once again I ordered a couple of the little suckers and let my face retaliate by eating the shit out of them! I really do have a lot of trouble walking past a friand…

We did not yet to eat at Utopia on this day, but just like the sailor who returns to the parlor of the lady of the night, even after previously contracting a horrible case of syphilis, I will return to Utopia to sample some of this food I am hearing of… and hopefully leave without a stinging case of syphilis.