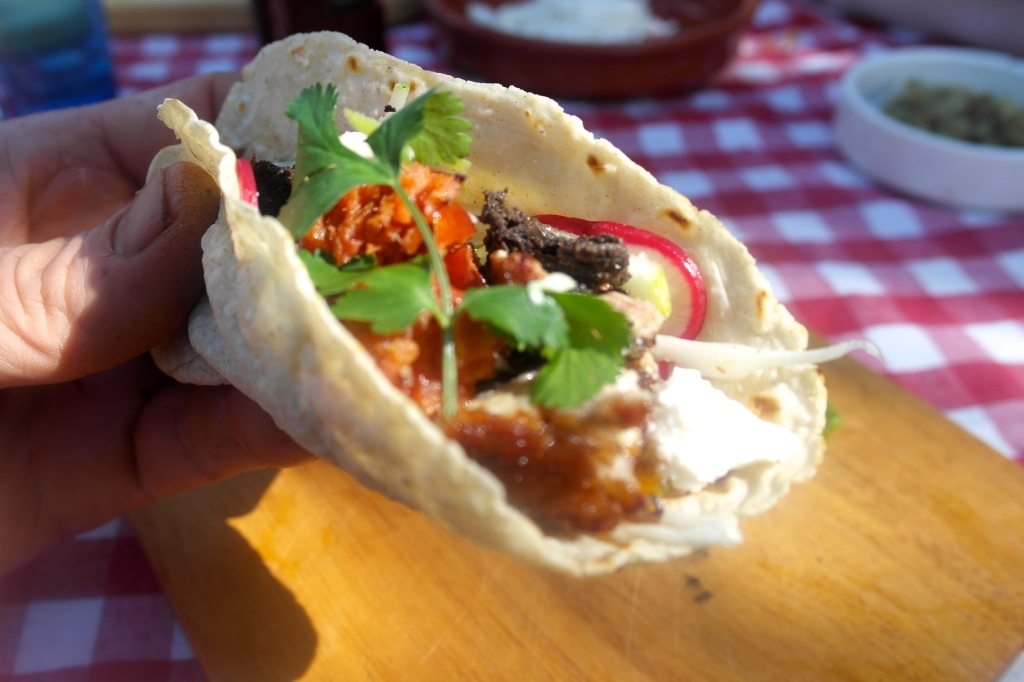 Recently my friend Dana at I’ve Got Cake challenged me to a cook-off of an old school classic with a bit of new school flair. A bit of the old “take a dish everyone knows and loves and make it a little bit our own”. Well, at least that’s what I think we’re doing. I didn’t really understand (or even fully read) the brief… was there even a brief? I do recall the phrase “there are no rules” being in there somewhere… or maybe I just dreamt that one too. We are posting this at the same time, yes, that was definitely in the brief!

Dana had thrown the gauntlet. And by that I mean I goaded her into it like a little brother, running down the street and taunting her every second of the way until she finally submitted and said I could play with her Barbie dolls and Californian Vacation doll house. Pulling her hair and, in later pre-pubescencey, the strap of her trainer bra.

I seriously would’ve made a great younger brother. Seriously.

Sometimes I think Dana likes conversing with me because I am like a weird red-bearded, skinny assed, white boy, interweb version of the younger brother she never had… or maybe she does have a younger brother, I don’t know. She does swear at me and says she hates me a fair bit though…

So what could I do to the humble pork taco to make it my own? Make the special kind of love to it down by the fire? Marry it in a Las Vegas cathedral ceremony conducted by a fat gay man in sunglasses (or maybe it was Elvis?)? Or force a Street Fighter-esque three hit combo of my favourite pork products into my face via this little rolled corn edible plate?

I’m going for the three hit combo, don’t be doubting. And I shall cook it on the fire, eat myself fat enough to be the next Elvis and be very gay about the whole situation, with out so much as a fashionable jacket (or something else a girl would wear) on my person, but just damn happy (Happy is what gay used to mean, you know?). See what I did there?… I didn’t think so…

These things were good. Really good. I was caught a little off guard by my family’s sudden embracing of the blood sausage and their forth with consumption of a good percentage of it, as normally I get to eat the blood sausage around here and no, that is not code for anything – just a comment about a grown mans’ love for the black pud.

I would also recommend giving the home made tortillas a try. They’re well worth the effort!

PS if you want to have a look at what Dana came up with (you should because it’s going to be funny and delicious, I don’t mind telling you) you will be able you see that right here.

PLENTY OF PORK TACOS (for 4)

• Cook the meats just as you would normally cook those meats. Just remember the pork belly is going to take a lot longer than the sausages are they are already cooked. That’s some quality free advice right there
• Once cooked to your liking chop it all up. Get two knives out and do it like a crazy Asian chef if that makes you feel good about yourself. Chuck the chipotle in there too
• That’s it
• Get it on the table and make sure you get yourself a good heap of the morcilla before your kids get to it!

SOFT TACOS (you best believe I made my own)

• In a medium bowl, mix together masa harina and hot water until thoroughly combined. Turn dough onto a clean surface and knead until pliable and smooth. If dough is dry add more hot water
• Cover dough tightly with cling wrap (plastic film) and allow to stand for 30 minutes. If it dries out while resting, sprinkle with more water
• Preheat a frying pan to medium-high.
• Divide dough into 20 equal-size balls. Using a tortilla press, a rolling pin, or your hands, press each ball of dough flat between two sheets of baking paper
• Place tortilla in preheated pan and allow to cook for approximately 30 seconds, or until browned and slightly puffy. Turn tortilla over to brown on second side for approximately 30 seconds more and then transfer to a plate. Repeat process with each ball of dough. Wrap tortillas with a towel to stay warm and moist until ready to serve.

55 responses to “The Pork Taco Challenge”